There is a new face on campus at The J this summer, and, in fact, you will see him at many other places around 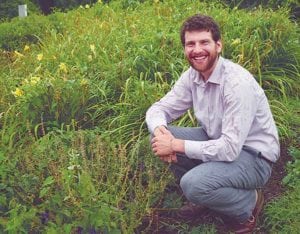 Louisville and even the region over the next year. Michael Fraade, nicknamed Farmer Mike, is a JOFEE fellow, and he has come to Louisville through a partnership between Hazon and the Jewish Community of Louisville (JCL) to promote Jewish interaction with the environment.

JOFEE, Jewish Outdoor, Food and Environmental Education, is one of Hazon’s outreach programs. A select group of Jewish young adults with a commitment to sustainable living and a love of the outdoors go through a special three-week training program together and then venture out into communities across the country to raise awareness of environmental issues and engage as many people as possible in Jewish food and outdoor education programs.

“I’m really excited about all of the potential,” Fraade said. “There is definitely a lot of interest in this at the JCL. I’ve visited a few times and met some people in the Jewish community and the Louisville community who seem really interested in doing this kind of work.

“I really enjoyed the city,” he continued. “There is a lot of great energy, a wonderful sense of openness and friendliness.”

Fraade has worked as a farmer in rural areas for the past two years. He worked primarily with community-supported agriculture (CSA) farms, growing vegetables and raising animals. Fraade says he is interested in exploring how to do some of that work in cities like Louisville where there are larger concentrations of people. He’s eager to get people actively engaged in his projects so they can spend more time outdoors.

His two biggest initiatives will be expanding the community garden and partnering with New Roots, a local food justice organization, to distribute fresh produce to places that are food insecure. He will establish The J as a Fresh Stop Market for distribution. He’d also like to start a composting system.

Fraade just arrived in town and began working on June 20. He’s looking forward to working with The J’s Early Learning Center, Summer Camp and seniors. He’ll explore programming opportunities with YAD and would like to work in some adult education, too. He’s eager to work with as many groups as possible and wants to “figure out what people might be interested in and how we can address that interest.”

Fraade grew up in Connecticut and earned a BA in history from Yale University.

Asked how he got from Ivy League history studies into Jewish farming, Fraade said, “I’d been involved in many Jewish groups and activities in high school and college. It was a strong part of my identity and it continues to be so.

“I did a number of different outdoor things,” he continued, including summer camp and Boy Scouts. In college, he took a break from outdoor activities, and for the first year after graduation, he worked for the Rabbinical Assembly as a special assistant to the executive vice president.

“A year after college, I decided I wanted to try my hand at farming,” he explained. “I started learning and traveling and eventually found full time work doing that in different parts of the country. For two years, he travelled, mostly in Virginia; and as he went, he became interested in integrating his outdoor work and farming with closer ties to the community, emphasizing education, justice work and Jewish education, as well as how to bring that kind of work into urban environments.

When a friend told him about JOFEE, it seemed to be a perfect fit.

Fraade worked as a livestock manager at Waverly Farms and a farm hand through the Worldwide Opportunities on Organic Farms work-exchange program prior to becoming a JOFEE fellow.

He also worked at Camp Ramah in New England, served as communications chair for a three-day Kehillat Hadar Shavuot Retreat and served as gabbai for the Egalitarian/Conservative Minyan at Yale.

Fraade’s first goal is to look around, explore and get a sense of what resources are currently available. He’s eager to “figure out who’s interested in what and develop partnerships and educational opportunities” as he figures out “where this work fits into sustaining and strengthening the entire community.”

Fraade encourages people to stop by and meet him. His office is at The J, and he can be reached at mfraade@jewishlouisville.org.