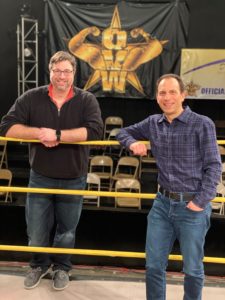 You’ll never see them in the ring, sporting spandex trunks, circling each other amid the din of the screaming crowd’s demands for action, looking for an opening to grapple, one locking the other’s neck in a half nelson.
But with their recent purchase of Ohio Valley Wrestling (OVW), Craig Greenberg and Jeffrey Tuvlin have proven to be a pretty good tag team – and a Jewish one, too.
Greenberg, Tuvlin and two other partners have acquired a majority interest in the Louisville-based sports and entertainment company. They plan significant investments, including an upgraded television contract, new production equipment and an enhanced website.
They are looking for a new venue with more seating and concessions. OWV shows are currently staged at the Davis Arena on Shepherdsville Road.
For Greenberg and Tuvlin, who happen to be brothers-in-law, owning their own wrestling company is a chance to do something fun together, perhaps even make a dream come true. And this company has trained some of the best athletes in the business.
“Louisville has a very strong history with professional wrestling,” Greenberg said. “Every Tuesday night, there used to be shows at the Louisville Gardens.… My dad used to take me there and I always really enjoyed that. I’ve just always been fascinated by the characters, the story and the spectacle.”
Established in 1993, OVW has 32 professional wrestlers on its roster – men and women – putting on live, televised shows all year round. It even has a state-licensed trade school for professional wrestlers.
Many of the OWV wrestlers have fought under some flamboyant ring names. Luscious Lawrence, Jessie Godderz (Mr. PEC-Tacular), and Reverend Ronnie Roberts are among the more memorable monikers. (No rabbis just yet.)
Most of the OWV wrestlers live in Louisville, but some travel from St. Louis and Cincinnati, partly because the shows are televised (not all wrestling programs are) and because Al Snow, a retired wrestler and reality TV star, is in charge of day-to-day operations and the academy.
“He’s the best in the business,” Greenberg said.
For some time, OVW was affiliated with the WWE Network, the major league of professional wrestling. Wrestlers came to Louisville hoping to be called up to the WWE, becoming household names in the sport. (Yes, it is a sport.)
But Tuvlin, a gastroenterologist at Baptist Health, who used to write and direct plays in college, appreciates the entertainment side of wrestling.
“The thing that gets me motivated is to see these individuals following their dream and really going for it,” Tuvlin said. “I took the route of going to medical school and being a [medical] professional, that type of work, and leaving the creative side of me behind. This is a great way for me to have that outlet.”
In fact, he said wrestling is a secret pleasure many Louisvillians enjoy.
“People don’t talk about how much they love this until they have a reason to talk about how much they love this,” he said. “I can’t get through my day without people wanting to talk to me about what is happening. It like rekindled something from them.”
Greenberg, until last year the CEO of 21c Museum Hotels, knows that feeling.
“Neither one of us plans to hop in the ring any time soon,” he said of himself and his brother-in-law, “though we would make a fantastic tag team.”
Though COVID has sidelined many OVW events, shows are still held every Tuesday night, though not at full capacity. Once the pandemic passes, Greenberg and Tuvlin plan to resume road shows as well.
In case you think there is no Jewish angle to professional wrestling, think again. Several of the top names in the sport, in and out of the ring, were Jewish, including Bill Goldberg (known to some as “Goldberg the Wrestler”); Sam Muchnick, a founder of the National Wrestling Alliance and head of the St. Louis Wrestling Club; Paul Heyman, who wrestled under the ring name “Paul E. Dangerously” and went on become a manager and promoter of the sport; and Melissa Ann Hiat (“Missy Hyatt”), a “valet” – the girlfriend character who sometimes accompanies the wrestler to the ring and gets into the act herself. Hiat also wrestled, proving that Jewish ladies can also mix it up.
That’s just to name a few.
Even some Israelis are getting in the act, like Leeor Brook – AKA “The Chutzpah” – and Noam Dar.
Along with Greenberg and Tuvlin, Matt Jones of Louisville and Andrew “Hubby” Jefferson of Lexington round out the investors group.
Professional wrestling is so popular that it might make a great Jewish community fundraiser. At least, Greenberg thinks so.
“Jeff and I would love to cohost that event,” he said.