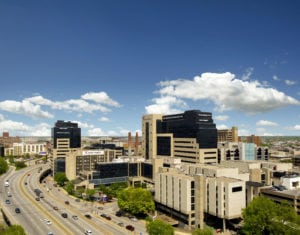 He should. He served on its board of trustees for 40 years, with a couple stints as its chairman.

“I loved it,” he said. “I believed in the cause and the services we could offer to the community. To be a part of that, and keep it as excellent as it was, was fulfilling to me.”

With the recent news that KentuckyOne Health Inc., part of Catholic Health initiatives, is planning to sell Jewish, and other local healthcare facilities, many in Jewish Louisville have been reflecting on the hospital – what it has meant to Jews here, and what it still means.

The hospital’s impact has been felt in many ways.

Opened in 1905 as a hospital where Jewish physicians denied privileges elsewhere could practice, and where Eastern European Jews could receive care sensitive to their cultural and religious needs, Jewish developed a reputation as a world-class care center that overshadowed its origins as a hospital for an ethnic group.

“When Jewish was thriving, it was a leading edge medical facility with its heart and hand facilities,” Shapero said. “We were really cutting edge, and we supported the university research.”

He was referring to the groundbreaking work done work done at the hospital’s Rudd Heart and Lung Center and Hand Care Center.

“We developed the patient base and the leading cardiac surgical services in this region,” said Dr. Morris Weiss, a leading cardiologist, whose great-uncle, Dr. Leon Solomon, was involved in establishing the hospital. “If you had a [heart] problem, you came to Jewish.”

“We always gave good patient care,” said Shapero, who was voted Trustee of the Year one year by Modern Healthcare Magazine. “It was considered a good hospital.”

But Jewish also made a mark beyond its operating rooms and emergency wards. It opened its doors to all of Louisville – black and white.

“‘Jewish had a truly open-arms approach to the community. This was a place that welcomed everybody, all races, religions, all socio-economic levels,’” internist Dr. James L. Bersot, Jr. was quoted as saying in Barbara G. Zingman’s book, A Legendary Vision: The History of Jewish Hospital.

According to the book, the first African-American physicians to practice at Jewish were Drs. Jesse Bell (1958) and Williams M. Moses (1959).

“Bell, an enthusiastic supporter of the Hospital, says, ‘The courtesies of the Jewish staff were a real asset. You don’t get that in a lot of hospitals. My patients appreciated the reception and the kindness of the Hospital,’ ” Zingman wrote.

Zingman continued, “Dr. Moses also recalls those early days and the welcome he received from his fellow physicians. He had contact with [a] Jewish pathologist consulting at the old, mostly black Red Cross Hospital. ‘They were extremely caring and helpful,’ he says.”

Zingman added that Moses became the first African-American physician to become president of the Jewish Hospital medical staff in 1980.

The hospital’s connection to the Jewish community remains strong, even today. As part of KentuckyOne Health, the hospital belongs to a system that was formed in 2012 by a partnership between Catholic Health Initiatives – a nonprofit, faith-based healthcare system – and the legacy Jewish Hospital Healthcare Services (JHHS).

JHHS would then change its name to the Jewish Heritage Fund for Excellence (JHFE), a grant-making organization that uses more than $100 million in financial resources to support the community grants for medical research/education, community health and wellness and the Louisville Jewish community.

Shapero lauded JHFE, which has invested $15 million in Louisville since 2012, as a lasting legacy of Jewish.
“Whatever happens [to the hospital], the community came out with the Heritage Fund, which really gives the community a tremendous amount of support,” Shapero said. “We as a hospital always supported the community, but never with the dollars that are now available to it.”

But even at the hospital itself, the connection to Jewish living and Jewish values remains strong, according to Rabbi Nadia Siritsky, vice president of mission at Jewish.

“This is the first time a rabbi has been a part of the senior leadership team,”

Siritsky said of her position. “I was hired in 2014 as part of KentuckyOne Health’s commitment to assure the Jewishness of Jewish Hospital, and much of my job has been to renew, restore and strengthen the Jewish identity of Jewish Hospital. That’s been the large part of my role.”

Today, Siritsky said, Jewish Hospital now has kosher food in its cafeteria, which is available to all; and a new menorah in the center in the Abraham Flexner Way Circle, which religious school students have decorated during Chanukah.

“We have celebrated Jewish holidays by applying the themes to our current projects. Such as launching our recycling on Tu B’Shevat,” Siritsky said. “We had a fundraiser that raised money for patients and families that have no money, so we were able to celebrate Purim and do tzedak. And for Tu B’Av (an Israeli holiday celebrating love), we launched a commitment to the Heart Walk .

Also, every week, the Jewish Hospital staff learns about the holidays and the appropriate Torah Portion. Siritsky said many staffers are grateful to get a stronger appreciation for the heritage of Jewish Hospital.

Siritsky collaborates with Jewish Family & Career Services to support immigrants in the community and of other projects, such as their joint SummerWorks Grant application, and has cohosted a Passover seder at the JCC to raise awareness for victims of human trafficking, an issue where Kentucky One Health has taken a leadership role, thanks to Siritsky’s initiatives in this area. Combatting human trafficking, she said, is in keeping with the Jewish value tzedakah.

“No one knows what the future holds, but I believe the leadership and staff have a strong commitment to maintaining the Jewishness of Jewish Hospital,” Siritsky said.

“I believe the core values of Judaism, of tikkun olam, should be kept in consideration as the question of how to move forward evolves .”

The J Early Learning Center graduated 14 students from the Pomegranate class at a ceremony on Monday, May 22. They were taught by Pomegranate Teachers: Jeanette Fisherman, Hope Curry and Donna Anderson. “A majority of the children have been here …

The 2017 JCL Annual Meeting will recognize leaders and volunteers, Jew and non-Jew alike, who make an impact in Jewish Louisville. It will also contain a few surprises. This year’s event, to be held Thursday, June 8, at The J …

The Louisville J has taken two significant steps to improve its level of environmental sustainability. It will work with Hazon, a Jewish environmental organization working to build healthier, greener Jewish communities, to earn the Hazon Seal of Sustainability. And it …