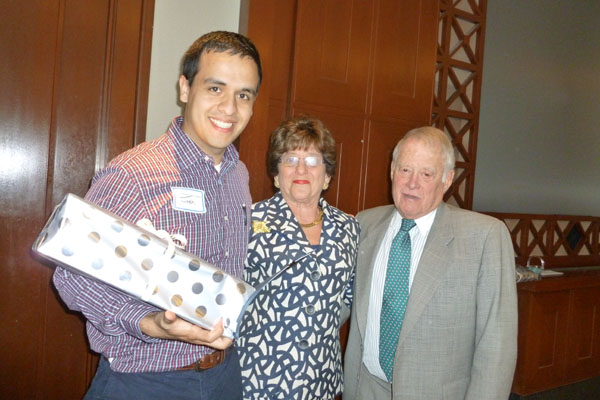 Spring was in the air and fun was in store when Jewish Hospital & St. Mary’s HealthCare (JHSMH) held its annual recognition event for volunteers from Jewish Hospital, Frazier Rehab Institute, the Hand Care Center, Outpatient Care Center, Heart & Lung Center and Jewish Hospital Medical Centers South, East and Northeast at the Rudd Conference Center on Friday, April 29. Volunteers are special to the organization, and each year JHSMH pays tribute to these unsung heroes for the many hours they unselfishly devote to patients and their families.

Rabbi Laura Metzger, JHSMH staff rabbi, leader of the Health Equity Initiative and member of the Mission and Values Integration Department and the Ethics and the Holistic Nursing Steering Committees, offered an invocation and blessing before lunch. “We give our time,” she told the group, “as our way of giving back for the bounty we have with deeds rather than words.”

The Conference Center never looked more festive as JHSMH Director of Volunteers Gina Parsons decorated the space in colorful Disney-style chic with lots of Mickey and Minnie Mouse dolls around to bring a warm and welcoming feel to the event. “You are wonderful,” she told the volunteers, “and we are honored and humbled to have you with us. We welcome you to the Wonderful World of Volunteering and thank you for all you do for JHSMH.”

Karl and Roanne Victor presented this year’s prestigious Julia Victor Nursing Scholarship to Joshua Potter, whose path to a nursing career began in 2005 when he was a counselor at Boggy Creek, a Florida camp begun by actor Paul Newman for children with cancer or other severe illnesses, and at similar camps in California and Ireland. After graduating from Centre College in 2007, he entered the business world, but soon realized that a nursing career would allow him to earn a living and gain great satisfaction as well. He is now a unit secretary/nursing assistant at Jewish Hospital.

The Victors also presented the 2011 Volunteer of the Year Award to Marcia Schuster, a faithful Monday morning volunteer at Jewish Hospital since 1972. Schuster has given over 4,500 hours of time as a “professional volunteer at hospital,” said Karl Victor. “She knows her job and is always prepared to do it well.”

Schuster was elected to the Jewish Hospital Board in 1983 and assumed the presidency 10 years later. She was honored as a life member of the board in 2000 and since 2005 has been an active and involved member of the JHSMH board where she sits on the strategic planning board and the nominating committee.

On receiving the award, Schuster said, “I learned voluntarism by example from my parents; I taught my children about volunteering and now take my grandchildren with me on monthly nursing home visits.”

JHSMH Vice President of Human Resources Ed Farmer, who has been with the organization for 30 years, brought greetings from JHSMH President and CEO David Laird, who conveyed his thanks and gratitude to the volunteers “for what you do every day to make life easier for patients, their families and physicians.” JHSM Foundation Vice President, Sherry Craig introduced a short video showing the organization’s extraordinary commitment to caring for patients.

JHSMH Vice President and Jewish Hospital Medical Center COO Brian Doheny presented volunteer-hour awards to many in attendance and praised volunteers for helping to relieve the anxiety patients feel when they come to the hospital. He also announced upcoming changes to Jewish Hospital including eventually converting 90 percent of the patient rooms to private, transforming the lobby area and gift shop, placing a coffee kiosk in the Abraham Flexner Way entry, changing the kitchen so patients and visitors can order meals via room service. Valet parking will be free for those undergoing tests or visiting the doctor.

The surprise of the afternoon was comedian “Big John” Richardson, who brought his big show to the proceedings and gave everyone something to smile about.