For the first time, the Jewish Film Festival will show one of its films at the Speed Art Museum – a move that Festival Director Marsha Bornstein hopes will expand the audience for the annual program.

The festival will screen the Israeli documentary Disturbing the Peace in the museum’s 144-seat Speed Cinema on Thursday, Feb. 23, at 7 p.m. 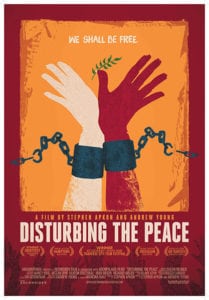 The film follows Israeli soldiers from elite units and Palestinian fighters, many of whom have served time in prison, as they come together and challenge the status quo. A discussion moderated Ranen Omer-Sherman, the Jewish Heritage Fund for Excellence chair of Jewish Studies at the University of Louisville, will follow the screening.

“This is a hopeful circumstance,” she said. “You have Israelis and Arabs, and they’re saying, it’s enough! And they’re doing something about this. Forget the government. What can we do?”

“My desire is to get more diversity in the audience,” she added. “Little by little, it’s happening. And this [film] is a good vehicle for that.”

By bringing the festival to UofL, she also hopes to reach a different audience.

“We’re hoping to draw in the students,” she said.

Omer-Sherman, a member of the film festival committee, shares that hope.

“I do think the film will likely have large appeal to the academic and greater community,” he said. “Especially in such a bleak time, domestically and internationally, people are drawn to authentic signs of hope and coexistence, especially when they avoid false notes of sentimentality.”

Omer-Sherman has firsthand experience with the issues addressed by the film.

“As a former Israeli combat soldier who fought the PLO in Lebanon back in the 1970s, I found the message of Disturbing the Peace tremendously stirring and consequential,” he said. “As an academic who has studied and taught the Israeli-Palestinian conflict since the mid-1990s, I found that it laid bare one of the deepest and most festering reasons for enduring enmity, namely the distance between two peoples in spite of their intense proximity to one another.

Dean Otto, curator of film for the Speed, said the museum has much to gain by being a venue for the festival.

“A major component to the film program at the Speed Cinema is the establishment of community partnerships,” he said. “The Speed Cinema has state-of-the-art projection, and I want to make sure that we can work with established film festivals in the community to provide great experiences for their audience members. It helps us raise the visibility of the Speed’s ongoing film program as well.”

“I would love to do this every year,” she said. “It’s a magnificent theater and partnerships in the community are important for everyone. We need each other.”

(A listing for all films at this year’s festival can be found online at jewishlouisville.org/film-festival. To purchase tickets, click here.)

Going to this year’s AJ Music Festival? Be true to your school and wear your colors, because this year’s program will have a decidedly collegiate feel. In fact, the theme for this year’s festival – which is slated for Sunday, …

“Hero of Auschwitz: The Life Story of St. Maximilian Kolbe,” features two actors from Bellarmine’s faculty and staff, and was produced by a former Bellarmine campus priest. The film tells the story of Kolbe (1894-1941) from his childhood in Poland …

Take a guided tour of the third largest city in the United States with all of your friends from The J June 19-23. We are taking a five day, four night trip to the Windy City and will stop at …