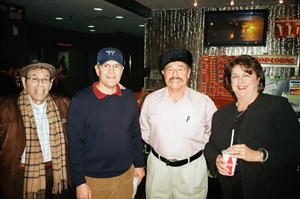 The Jewish Community of Louisville’s Louisville Jewish Film Festival completed its 12th year, showing nine innovative, award-winning films to the community. In spite of the snow, a diverse audience braved the weather to see international films not usually presented in Louisville.

Many people expressed their enjoyment, and others were intrigued by the thought-provoking topics portrayed, which led to fascinating discussion. Moderators at the films, Rabbi David Ariel Joel and Moshe ben David helped those in attendance look at different perspectives and gain new understanding.

Highlights of the festival included the screening of Saviors in the Night with 40 parochial school students, parents and teachers. The film about Catholic farmers hiding a Jewish family was especially poignant with this audience. 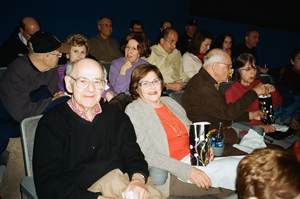 Professor Natalie Polzer coordinated five departments at the University of Louisville with the Film Festival to make it possible for the community to see a free showing of an Israeli film about the withdrawal from Gaza.

The festival, co-founded by Louis Levy, is the result of many months of work. The committee reviewed 45 films and discussed their merits before making their choices.
The festival was directed by Marsha Bornstein and co-chaired by Angeline Golden and Keiley Caster.

After five years, Golden is retiring as chair, having devoted much time and talent to this project. “She is an exceptionally skilled and wise leader who brought much warmth and fun to the meetings,” said Bornstein. “The festival will continue to grow under the very capable direction of Caster,” who will take over as chair.

The JCL is grateful for the leadership supplied by the committee, the insights provided by the moderators, the generosity of the Frazier International History Museum and the University of Louisville, and support of the festival patrons. It would be impossible to have a film festival without their help.