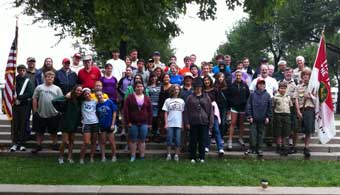 When the Hunger Walk got underway Sunday afternoon, September 18, organizers announced that more than $100,000 had already been raised and the gathered crowd was the largest group of walkers ever. The Jewish community was there in force with the Jewish Louisville team organized by the Jewish Community of Louisville’s Jewish Community Relations Council and Chad Kamen’s Team Food Chain. Both groups were major sponsors of the event.

As has become tradition, The Temple Boy Scout Troop 30 led the walkers. This year’s event followed a new 5K route. Usually participants cross the Second Street bridge, but since the Sherman Minton Bridge has been closed following the discovery of a structural crack, the Clark Memorial Bridge had to be kept open.