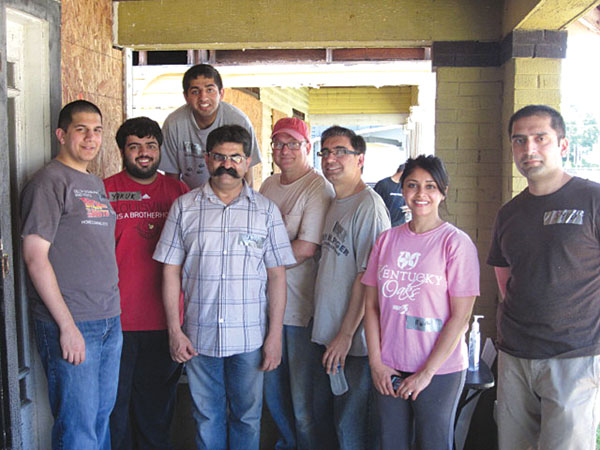 During the last part of 2011, the Jewish community participated in a number of tikkun olam (the repair of the world) projects, including a Habitat for Humanity home and a wide variety of Merry Mitzvah projects. Amy Benovitz coordinated these efforts.
Habitat for Humanity

The Jewish community participated in its 10th Habitat for Humanity home in partnership with St. Francis in the Fields, St. Mark’s Episcopal and APPKI (American Physicians of Pakistani Descent in Kentucky and Indiana. Several other Episcopal and Lutheran churches also participated. Together the groups remodeled the home at 111 S. 41st St. for Alonte Brock and her two children.

The home was dedicated on December 4. 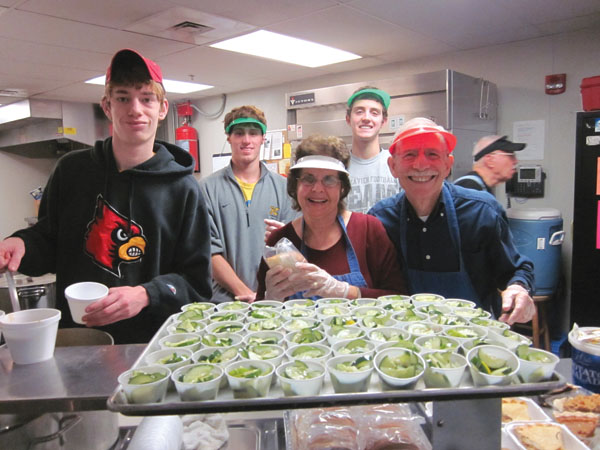 “A heartfelt thank you from the agencies (and me), who appreciated the care and concern you showed by volunteering,” said Merry Mitzvah 2011 Coordinator Amy Benovitz. “Whether you served food, donated warm clothes (or checks) or made someone smile: Thank you! Every option was full!”

In addition, volunteers prepared 500 sandwiches for clients at St Vincent DePaul’s Osnaman Center on January 1, and the sandwiches went well with the four fruit baskets donated by B’nai Birth. They also repackaged 200 food baskets for clients involved with Schuhman Center of St Martin of Tours. 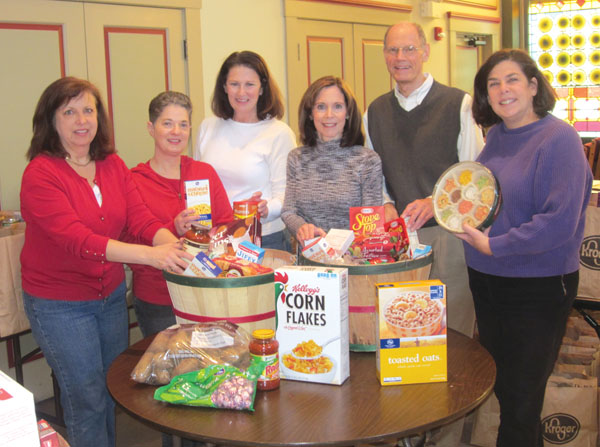 Volunteers entertained at the Home of the Innocents, Hosparus and  the Volunteers of America Family Shelter; and they spent several days wrapping presents at Brooklawn Children’s Home. Eight carloads of warm coats, sweaters and gloves were donated and delivered to several agencies, including Coalition for the Homeless, Catholic Charities Refuge Ministries Program, Schuhman Center and Volunteers of America Family Shelter. Several of these agencies help men who live outside, who really needed sweaters, coats, blankets and new socks.

“People are living outside and your donations help keep them warm,” Benovitz commented. “Since I started delivering in November when the weather changed, our donations are always snapped up and arrive in the nick of time. Thank you!”
Donors provided new clothes and gifts for Jewish children through the Hanukah Helpers program, run by Temple Shalom and Jewish Family & Career Services.

“The Temple religious school children donated over 150 pairs of gloves, blankets, caps and new underwear for children at Volunteers of America, Schuhman Center and Hanukah Helpers,” Benovitz reported. “This year, many of my friends were downsizing and many needy clients benefited from cookware, blankets, bedding, furniture, clothing, tablecloths and coats.

“Our Merry Mitzvah Project has turned into the more, the merrier,” Benovitz said. “Besides our fantastic individual volunteers, we have families, groups of friends, court personnel, Central State Hospital personnel, employees at local law firms and individuals who read our Community newspaper making a difference in the Holiday Season, and we appreciate everyone.”

“Thanks to each and every one for making a difference this season,” Benovitz concluded. “The agencies requesting help need volunteers the other 364 days a year and you can call them directly or call me to continue making a difference in our community. Need has no season and every agency can use you any day.”

Dear Valued Members, Two weeks ago, the Jewish Community Center closed the indoor pool and spa areas to add chair lifts for handicapped access as mandated by the Americans with Disabilities Act. The renovation is now complete and both whirlpools …

[by Phyllis Shaikun] On Monday, August 22, Jane Goldstein was shocked to learn that as part of the University of Louisville’s “Charting Our Course” campaign, and in recognition of the contributions she has made to the university and its students, …

Super Sunday, the telethon for the 2012 Federation Campaign, is just around the corner and that means it is time to “Energize Our Community.” Helene Kramer Longton will be leading the charge, and she’s looking for lots of volunteers to …