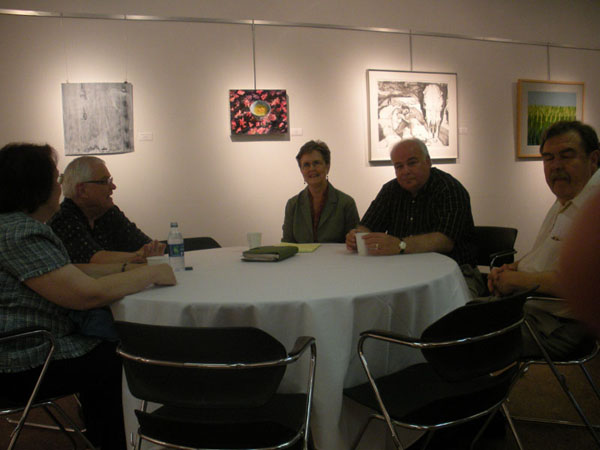 For many years, there has been tension between much of the Jewish community and the Presbyterians over the two groups’ differing perspectives on Israel.

When the Presbyterian Church (U.S.A.) convenes its General Assembly biennially, the church leaders consider a series of initiatives that guide church policy for at least the next two years. At each of the last several GAs, one of the initiatives has dealt with Israel and this year, there will be a proposal that the church divest from three American companies – Motorola, Hewlett Packard and Caterpillar – because the church committee that sponsors the initiative contends, those companies manufacture products that they sell to Israel which then uses them to oppress the Palestinians.

The Jewish community opposes divestment and the one-sided arguments the committee uses to support its recommendations and has repeatedly engaged national church leaders, headquartered here in Louisville, in discussions presenting its reasoning.

This year’s Presbyterian GA will convene June 30-July 7 in Pittsburgh; and once again, the initiative pushing divestment is on the agenda.

As this issue surfaces repeatedly, this year, the Jewish Community Relations Council decided to try a different approach to the dialogue. Working with Rev. Betty L. Meadows, the General Presbyter of the Mid-Kentucky Presbytery, the JCRC extended an invitation to all clergy and lay leaders of Presbyterian churches in Louisville to come to the Jewish Community Center on Sunday, May 20, to begin a discussion of the issue and to build ties between our communities. Some of those invited to attend will be delegates at the GA.

The gathering drew about 25 people from the two communities, and the dialogue began with formal presentations and informal conversations.

JCRC Chair Ayala Golding and Jewish Community of Louisville President and CEO Stu Silberman welcomed the group; and Meadows responded, “Even if we differ [in our perspective], it is time to listen. There is too much anger in the world, and I’m grateful for the opportunity to listen.”

Meadows also extended a return invitation to the JCRC to come and listen to a Presbyterian forum that she promised will examine the entire history of this issue.

While Segal promised not to dwell on the politics of the region, he noted that Israel’s new national unity government has a strong enough majority that it creates the potential for movement toward resolution of the Israeli/Palestinian conflict. Both sides “hope for a peaceful settlement to the existing conflicts – one which will satisfy the aspirations of two peoples, Palestinians and Israelis. That means a two-state solution.”

A two-state solution, he explained, would facilitate cooperation between the two peoples, improving lives. Israeli children living near Gaza and Lebanon would no longer need to dash to the safety of bomb shelters and Palestinian children would not have fear “being caught in the middle of military activities” that might cost them their lives.

Segal spoke of the threats to Christians and Jews posed by jihadists who “wish to see these territories become totally, or almost so, Moslem, and are willing to achieve that goal by force,” and Hamas, the hostile power in Gaza that seeks to destroy Israel.

Both Israelis and Palestinians feel under siege, he continued. Israel is surrounded by hostile neighbors, and there is even talk in Egypt of reconsidering the peace treaty. Palestinians face Israeli occupation and control wherever to go, “from roadblocks to unjustified detentions, as well as having disrupted access to facilities like hospitals and doctors.”

Segal then challenged the idea that divestment from Motorola, Hewlett-Packard and Caterpillar would foster peace. Instead, he called on the Palestinian Authority to “take positive steps to restart the negotiations that will, eventually lead to a peace settlement.”

If the Presbyterians want to put pressure on Israel, Segal suggested, it would be more effective to work through Israeli groups that “are seeking to change the current government’s position” like B’Tselem, Peace Now and the New Israel Fund.

Divestment would also be counterproductive, he noted, because there would be unintended consequences. For example, Motorola provides the equipment that enable the Magen David Adom and the Red Crescent, the Israeli and Palestinian equivalents of the Red Cross, to coordinate their efforts and save lives.

He also explained that this kind of sharing between Israelis and Palestinians extends to other areas as well, including agriculture and sharing scarce water resources, and had positive words for Palestinian Prime Minister Salam Fayyad’s efforts to build the Palestinians’ infrastructure. He even called on the group to hope for Fayyad’s full and quick recovery from a recent heart problem.

Segal wrapped up his presentation by highlighting Israel’s diversity, religious tolerance, acceptance of Arabs as full citizens, educational attainment for all citizens, democracy and industrial, technological, medical and agricultural leadership.

“We need to keep in mind that our ultimate goals converge,” he concluded. We are both interested in achieving peace, justice and improvement in peoples’ lives.

Rabbi Stanley Miles spoke briefly about building bridges between the Jewish and Presbyterian communities, recounting the many positive personal contacts he has had with the visitors’ faith community.

He also recounted some personal experiences he had in Israel’s Western Galilee, our partnership region, that demonstrate the inclusiveness of Israeli society, pointing specifically to the Western Galilee Hospital which has and second complete hospital underground lest it become a target during war as it was during the Second Lebanon War. WGH’s director is an Arab and the hospital serves all who need its help.

We are all made “b’tzelem elohim,” in the likeness of God, he concluded.

JCRC Director Matt Goldberg also made a few comments. “I’m not here to tell you that Israel is right and the Palestinians are wrong,” he stated, “I’m here to express concern about branding Israel as an apartheid state and about divestment.”

Divestment, he contends, lays all the blame on one side and does nothing to resolve the issues that must be solved in negotiation. “I encourage all our friends to support resolutions that promote negotiation,” he said.
If there is any good that can come from the divestment initiative, he said, is that it can strengthen the relationships between the Jewish and Presbyterian communities.

Both Golding and Goldberg expressed a desire to get to know the Presbyterians better, to explore the values the two groups share, and, perhaps, to work together on social justice issues.

Review by Keith Waits The Full Monty is so much fun that I cannot believe this production was my first time seeing it. I am well acquainted with the original film, upon which this lively musical is based; but this …

Life begins and ends with girlfriends [by Phyllis Shaikun] The National Council of Jewish Women, Louisville Section’s closing meeting and installation of officers at Rivue on Wednesday, May 16, was delightful. President Mindy Klein, who is beginning her second year …

by Peter Clark Last night I had the pleasure of watching the Jewish Community Center’s Center Stage open their hearts and their pants in the movie-turned-musical, The Full Monty. It was a mixed performance that I have a hard time …