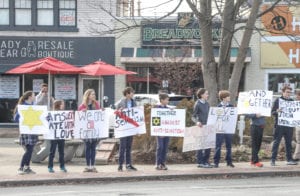 Eighth graders from St. Francis of Assisi School in Louisville demonstrated against hatred of the Jews during Anti-Semitism Awareness Day. They stood along Bardstown Road holding signs , encouraging motorists to honk in support of their message. (Fred Whittaker photo)

While there are no known hate groups openly operating in Louisville area schools, their message is still getting through to students.
Matt Goldberg, director of the Jewish Community Relations Council (JCRC), said kids could easily access hate groups through parents or social media.
That means Jewish children, or children of any minority, can be vulnerable to abuse.
“The Internet is a dangerous place,” Goldberg said. “Does a hate group need to operate more than a Facebook page to be efficient? I don’t know the answer to that. It (the Facebook page) may be enough.”
That’s why JCRC is working with the Anti-Defamation League (ADL) to bring to the Louisville area a professional education program to help teachers, administrators and curriculum specialists, stemming anti-Semitism in their schools.
The program, which is still in the planning stages is expected to be rolled out in a few months.
It would bring ADL staff here to train educators how to spot hate activity and how best to respond when incidents occur.
Specifically, the program will be initially rolled out in Oldham County Public Schools, where the most recent anti-Semitic incidents have been reported. (Other recent anti-Semitic activity has been reported at a local private school, with the head of the school responding in an appropriate and constructive manner).
In addition, the program will work to establish a “No Place for Hate” designation that schools could earn by meeting certain criteria.
This effort comes at a time when violence against Jews in America is surging.
In Brooklyn, several Orthodox Jews have been attacked and beaten.
In Jersey City, two gunmen opened fire at a kosher supermarket, killing four.
In Monsey, New York, a machete-wielding man entered the home of an Orthodox rabbi during a Chanukah party, injuring five guests, one of whom remains hospitalized, comatose, and tethered to a respirator.
There has been no report of violence against Jews in local schools, but anti-Semitic slurs – and swaskitas – have been reported. The JCRC has sent speakers to those schools – Holocaust survivor Fred Gross, rabbis, Goldberg himself – to talk to the students and school officials.
“Any time there are incidents of anti-Semitism, we want to meet with heads of school,” Goldberg said. “We want to make sure they are handling it properly.”
He added that the ADL already has free curricula online that teachers can use in their classrooms.
Some schools are being proactive in their responses to anti-Semitism. For instance, eighth graders at St. Francis of Assisi School recently demonstrated along Bardstown Road in support of the Jewish community. Motorists honked and waved to back them.
In the past, Goldberg said, school officials didn’t always take anti-Semitism so seriously, treating the incidents as one-time events.
That’s changing, he said.
“People are more aware of the atmosphere here, in the world or the country,” he said. “Heads of school want to nip this in the bud before it becomes a real problem.”
Still, he’s concerned that some anti-Semitic incidents in the schools go unreported.
“My fear is, for every issue we hear of, there’s one we have not heard of,” Goldberg said. “We can only deal with the issues we have heard of.”