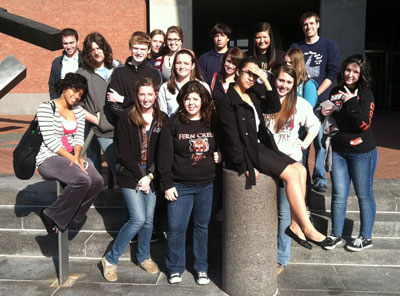 On Sunday, March 20, 14 high school students and one college student participated in the Jewish Community of Louisville’s Ida and Bernhard Behr Memorial Holocaust Museum Trip. The trip, sponsored and paid for by a Second Century Fund of the same name, was free for the participants.

Fred Whitaker, a science teacher at St. Francis of Assisi who also specializes in Holocaust and genocide education, served as the guide for group. He has led this trip and a similar trip for teachers during the summer since 2007, following the passing of his mentor, Ernie Marx.

Following the trip, the two exhibits that students said touched them the most were the room with the shoes – thousands of pairs that had been confiscated from Jews and other Holocaust victims moments before they were killed – and a picture gallery of life in eastern European shtetls, before the Holocaust destroyed that way of life.
Students left the trip inspired to bring their knowledge home to their schools, churches, synagogues, and families.

The Ida & Bernhard Behr Memorial Holocaust Memorial Education Second Century Fund was established by Claus Behr, and the first group trip to the U.S. Holocaust Memorial Museum in Washington, DC, was in 1999. Since then more than 300 students have had the opportunity to visit the museum and learn about the Holocaust.