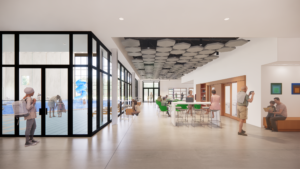 The Street, a main feature of the future JCC, will be pictured in the Jan. 14 virtual tour of the center, which is still under construction.

More than one year before the new Jewish Community Center of Louisville opens its door, its staff and executives did a walk-through of the new building Friday, Jan. 8 – a virtual walkthrough.
Staff members called in to a Zoom tour of the future facility, which is under construction at the back of the JCC campus on Dutchmans Lane.
Jerry Abramson, one of five co-chairs of the capital campaign committee, told the staff how important this tour was so they can share the excitement and answer members’ questions about what will be in the new JCC.
“We want you to have the clear understanding of what’s coming,” Abramson said.
The public is invited to join in a live virtual tour on Jan. 14 during the JCC’s Capital Campaign Community Kickoff from 7 to 8 p.m. Doron Krakow, president of the JCC Association of North America, will be on the call.
The work is being done as the JCC continues to raise money for the $42.5-million project. So far, more than 400 donations, from individuals and foundations alike, have been received.
Chris Carmicle of PLC Management, the owner’s representative on the project, led the tour, which took the staff through every nook on both floors (there is no basement) of the future JCC. 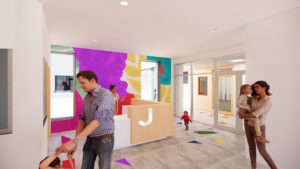 The lobby of the Early Learning Center

He highlighted the commons areas, the multipurpose space, the subtle design features that reflect Jewish symbolism and the use of windows and natural light that will make the center feel much larger than its 106,000 square feet.
The building is divided into four sections:

A couple design elements of the JCC reflect the Jewish character of the building, like lines on the precast walls to resemble the stripes on the tallis and suspended six-point ceiling tiles to suggest the Star of David.
Security is seamlessly blended into the campus and JCC, which is safer by being built at the back of the campus. Multiple security experts have been consulted to develop the features that will protect the building.
The floor plan, fluid and simple to navigate, will lead to the gallery space, the new PJ Library reading nook, all areas connected by The Street, where people can meet, sit and watch pool activities through a long bank of windows.
On the second floor, there will be another gathering space amid administrative offices and “huddle rooms” for meetings.
Sara Klein Wagner, president and CEO of the Jewish Community of Louisville (JCL) said this space will reunite the staff, many of whom have been working at home for 10 months because of the coronavirus.
“This is the home for all of us,” Wagner said. “This is where we will be living together.” 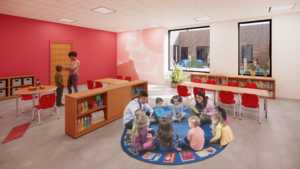 A view of one of the 12 classrooms

The Aquatics Center, a cornerstone, will feature a lap pool with six 25-foot lanes, a recreation pool with a water slide, zero-depth entry and a hot tub. Parents can watch their kids swim from a second- floor bank of windows while working out on ellipticals or treadmills. The outdoors pools will remain and will continue be a destination for members during the summer.
JCC Aquatics Director Johnny Kimberlin said the new center will provide the freedom to hold multiple pool activities at the same time.
“The JCC has always been the place where so many individuals grew up learning to swim and the new facility will enhance these opportunities as well as provide a place for families to convene around aquatics,” he said.
The rest of the fitness center will be equipped with AV-capable exercise machines, three group fitness studios, a cycle studio, full- and half-basketball courts and a longer running track where 12 laps will equal a mile – all making the new JCC more competitive with fitness centers around Louisville.
“The new JCC health and wellness facility is a chance for us to offer an enhanced experience for our members,” Health & Wellness Director Susan Kwasny said. 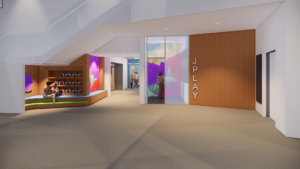 The multipurpose room – the future home for JCC and arts and culture programs – will have capacity for 250 people. It will be built with movable walls that creates spaces for smaller, more intimate functions
“The concept was flexibility,” Carmicle said. “We can break this up and will have groups of 20, 60 or 250 in this space, most importantly, so we can use this space as much as possible.”
Finally, the education wing will have its own reception area leading to 12 classrooms, each with its own bathroom and sink.
Several staff members commented in the Zoom chatroom expressing their anticipation of the new facility.
Angie Becker, accounts payable and payroll coordinator, said, “Such a fantastic space and wonderful design.”
JOFEE Director Alayna Altman said, “WOW! It’s beautiful!”
Carmicle said the center will be ready for use by the spring of 2022.

(Editor’s note: A photo gallery of slides from the virtual tour will be published in the Jan. 29 issue of Community.)