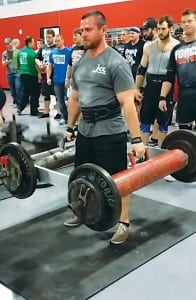 Ryan Perryman, a personal trainer in the JCC’s health and wellness department, might not fit pre-conceived notions of a World’s Strongest Man competitor.

He’s not a hulking beefcake of a guy, the kind you see on ESPN2 pulling a line of cars.

But at 5 feet 9, and 220 pounds, he’s considered a light heavyweight, and in the Strongman competition, that almost means more, he said.

“Those big guys, they can do what they do with sheer mass,” he said. “We have to be much stronger.”

Peryman competed Jan. 18 in the World’s Strongest Man North American preliminary event. He was on target to place 8 out of 11, but hurt his back and had to withdraw before finishing. This was his second competition; he placed third in an event held in Kentucky in 2011.

Most would agree, just being able to meet the requirements of the competition is quite a feat.

Perryman, 29, has been training since he was 14 years old. He was a pudgy kid and his dad suggested he start lifting weights and helped him get started. They worked out together and competed with each other.

Perryman said he liked working toward goals, and improving day by day. It taught him discipline and perseverance, he said.

“There are a lot of great lessons you can apply from the gym outside of exercise,” Perryman said.

But again, don’t pre-judge Perryman. He’s no gym rat with nothing between the ears.

Perryman, who has a BA in Humanities from Indiana University Southeast, is also working toward his Master’s degree in Civic Leadership from University of Louisville. His thesis focuses on using feminist standpoint theory to create more holistic approaches and policies for exercise and exercise education.

He said he’ll keep competing in Strongest Man competitions. The final competition is invitation only.

“I’d like to achieve professional strongman status,” he said.

If you could attend a school to learn more about Judaism but there were no exams, no homework and no grades – and the only requirement was to commit to a program of learning and participation – would that pique …

By definition, Ben Gurion Society members are young leaders in the community. Age 45 or under, they realize that they must volunteer and participate in the community. They also demonstrate their support through gifts of $1,000 or more to the …