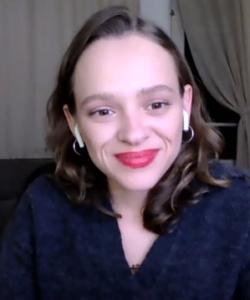 For Israeli actress Shira Haas, playing a teenage girl with a degenerative motor disease, as she did in the movie Asia, had a familiar ring to it.
Haas, 25, was diagnosed with kidney cancer just shy of her third birthday. She said that early-life experience shaped who she is today.
“It’s definitely something that is part of me,” Haas said in a Feb. 21 Zoom interview with Adath Jeshurun Cantor David Lipp. “I don’t really remember myself as well without it. It’s kind of like I feel it’s the starting point of my life.”
Even though she brought her own experiences to her role in Asia, and despite the character’s physical struggles, this is not a movie about illness, she said.
“The movie is about life; it’s not about death…. It’s about our connections with people.”
Asia was one of the films screened at the 2021 Louisville Jewish Film Festival which boasted unusually strong star power this year, thanks to Haas.
Her interview with Lipp, which was sponsored in part by AJ, had to be moved up one week because she has been nominated for a Golden Globe Award for her role in another production, Unorthodox, a Netflix series about a Hasidic woman fleeing an unhappy marriage. The awards ceremony will air at 8 p.m., Sunday, Feb. 28, on NBC.
Haas is the first Israeli actress to be nominated for a Golden Globe and a Primetime Emmy.
Not only did cancer shape Haas’ life, it also changed her identity. When she beat the disease at age 5, a rabbi suggested her parents change her name from Mai (Hebrew for May), sort of like a rebirth.
“They asked me, ‘What name do you want?’ And I said ‘Shira,’” Haas recalled. “So, basically, I changed my name.”
She doesn’t know why she chose
Shira, which means song in Hebrew, but the performer, who has sung in some of her roles, thinks it was more than just chance.
“I think there are no coincidences,” she said.
Asia is about a single mother, Asia, and her sick daughter, Vika (Haas’ role), Israeli immigrants from Russia. As Vika’s condition worsens and her desire to live a more normal life takes hold, the mother-daughter relationship, distant at first, begins to change.
Making this movie was an emotional experience, Haas said. The “hard core” final scene was done on a closed set without rehearsal – because it couldn’t be rehearsed. She and her co-star, Alena Yiv, who played Asia, left the set drained.
Then there was a “hard and beautiful scene” in which her character tries to commit suicide, and is stopped in time by her mother, that was cut. Haas said she and her co-star, Liv, were committed to that scene, so she was “devastated” to learn that it had been taken out because it conflicted with the direction of the film.
Haas said she came to agree with that decision. At the time, though, “it broke my heart that they took it away.”
Like her other pictures, Haas prepared for the role meticulously. She always studies her scripts reverently. In this case, though, she also met with physicians and patients living with the same disease as Vika’s. (She said it was ALS, though the film never names it.)
She learned as much as possible about living with the disease before performing. “I was so, so ready for it that on the day on set, I knew exactly where I was in each scene.”
For a 25-year-old actress, Haas has already lined up some impressive credits. In addition to Unorthodox and Asia, she appeared in A Tale of Love and Darkness (2015), which was Natalie Portman’s directorial debut; she co-starred with Jessica Chastain in The Zookeeper’s Wife (2017) and with Harvey Keitel in the biblical drama Esau (2019).
She’s also a cast member of Shtisel, which is in its third season on Netflix.
She said the characters she plays bear little resemblance to her in real life, which is part of their attraction.
Another attraction is the languages and dialects she must master for these films. For instance, she had to become familiar with Yiddish (and German) for her role in Unorthodox and speak with a Polish dialect in The Zookeeper’s Wife.
That one detail is indicative of the preparation the actress commits to each role.
“There’s a lot to learn from language,” Haas said, “and I want to learn as much as possible.”

By Lee Chottiner Community Editor Ann and Sandor Klein lived lives that resonate to this day. Childhood sweethearts from the same village in Hungary, Sandor left for America in 1938, serving as an Army Air Corps sergeant during World War …

Guest Columnist Michael Jackman Have you read any Jewish poetry lately? Would you? Those aren’t really fair questions. If you have been to synagogue, if you have read the Hebrew Bible, if you have recited any of the liturgy, you …