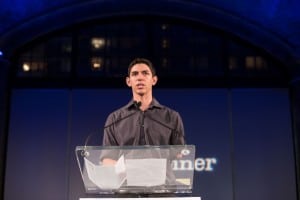 Faced with the loss of an arm in combat, how many of us would have what it takes to overcome that devastating loss and return to serve and excel in our previous position? Very few.

Yet that is exactly what Izzy Ezagui did, and he’s coming to Louisville on Tuesday, March 22, at 6:30 to tell his story on the University of Louisville campus in the Bingham Humanities building, room 300.

Izzy Ezagui was born and raised in America and visited Israel with on a Birthright Israel trip at age 18. He went in search of fun and returned committed to joining the Israeli army.

Soon after he finished his training, war broke out on the border of Gaza. Two weeks later, he was hit by a mortar and lost his left, and dominant, arm. Despite this devastating loss, Izzy’s first thought in the hospital was that he must return to combat.

Most people thought he was dreaming, but two months later, he was lucky enough to meet a general who gave him that chance. Soon he was doing one-armed pushups, climbing rope, shooting assault rifles, and pulling out grenade pins with his teeth.

Izzy’s story is not over; far from it! He continues to serve in the military reserves in an elite unit that plays a large role in any battle the IDF engages in. In May of 2011, Shimon Peres, the president of Israel, awarded him the highest accolade a soldier outside the battlefield can receive.

Today, Izzy speaks at many charitable events around the world, and he has addressed audiences of well over a thousand on the topics of disabled veterans, victims of terror, and the Israeli army.

Izzy also mentors numerous visiting youth groups, most recently those from the UK and the United States. Since youth groups helped him find himself in Israel, Izzy now gives back by doing what he came to help others to do the same.

This event is cosponsored by the Louisville Hillel and the Jewish Community Relations Council. It is funded by a grant from the Jewish Heritage Fund for Excellence. For more information, contact Benji Berlow, bberlow@jewishlouisville.org or 502-238-2715.

The Center for Women and Families (CWF) will honor five Women of Distinction and present the Joan E. Thomas Lifetime Award for Peacemaking at the 29th Celebration of Service & Survival on Friday, February 26, 2016 at the Seelbach Hotel. …

As announced at the 125 Gala, the JCC of Louisville is joining many other JCC’s around the country in a new, more unified brand. The new J logo, is bold and dynamic and fits in with the iconic brands of …

The Torah is replete with many references to the stranger, from Abraham opening his tent to strangers to being reminded to be kind to them because we were strangers once in Egypt. This commandment is one of the tenets of …