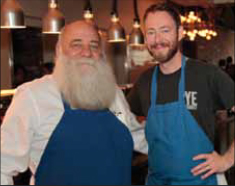 Uri Jeremias, left, pictured here with Chef Tyler Morris during his 2013 visit to Louisville, says he will reopen his Akko restaurant, which was damaged by rioters. (Community photo)

The violence that has rocked Israel has reached Jewish Louisville’s Partnership2Gether region in western Galilee, and even Israelis whose work – and delicacies – have filled the community.
One of them is Uri Jeremias, owner of the Uri Buri restaurant and Efendi hotel in Akko, which was attacked, torched and burned by masked rioters.
He told The Jerusalem Post that he is not angry, saying “anger inhibits.” He vowed to reopen.”
Jeremias visited Louisville in 2013. During that stay, he collaborated with Rye on Market Chef Tyler Morris on a tasting brunch at the Nulu-based bistro called Farm to Table: Israel to Louisville.
“The event at Rye’s on April 28 sold out quickly,” Community Editor Shiela Steinman Wallace reported at the time. “The diverse crowd that filled the dining rooms expected a sensational experience, and they were not disappointed. The two chefs presented a seven-course meal of small bites, each one artfully presented and prepared.”
Louisville and Western Galilee have been partner communities for 20 years. Indianapolis, Dayton, Ohio; Austin, Texas; and Omaha Nebraska also are partners with that region.
“We have built friendships, learning, laughing and working together,” the Jewish Community of Louisville said in a prepared statement.
Israel has been struck by more than 1,000 rocket attacks in latest violence. Riots also have broken out in many parts of the country.
Victims of which are being helped by The Fund for the Victims of Terror, established by the Jewish Agency and supported with special allocations from the entire Jewish Federation system.
“Our Israeli friends are so grateful for the many notes, emails and calls from our American friends offering support and sending love and virtual hugs,” the JCL said in a prepared statement.
“We are so proud of the special ties we have built and continue to build between our American, Hungarian and Israeli communities in our Western Galilee Central Region Consortium Partnership,” the statement said. “It is times like these that highlight the necessity to do so, and the rewards we glean from our relationships.

By Lee Chottiner Community Editor Ally Doctrow has been making art with Jewish themes for two years, but nothing as intense as this. For her senior project, the 21-year-old recent graduate from the Milwaukee Institute of Art & Design (MIAD) …