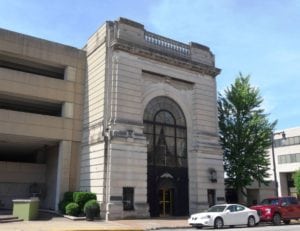 The old First Financial Bank in Terra Haute, Indiana, will become the future home of the CANDLES Museum and Education Center. (photo provided)

TERRE HAUTE, Indiana – A historic downtown bank building will soon become the new home of a Holocaust museum.
CANDLES Holocaust Museum and Education Center will move into the old First Financial Bank at 643 Wabash Avenue once the circa 1903 structure is restored.
The project is expected to take three to five years to complete, a spokeswoman for the museum said.
CANDLES (Children of Auschwitz Nazi Deadly Lab Experiments) was founded as a nonprofit organization in 1984 by Eva Mozes Kor, a survivor who, along with her twin sister Miriam Mozes Ziegler, endured brutal experiments at Auschwitz by Dr. Josef Mengele.
First Financial Corporation, the parent company of First Financial Bank, announced last week that it is donating the building to Indiana Landmarks, a preservation group. The structure must undergo stabilization and other restoration work before CANDLES can move in.
First Financial is contributing $110,000 to to assist with the work.
“First Financial is pleased to help preserve a building known to generations of people in this area,” CEO and President Norman L. Lowery said in a statement. “As our main office headquarters for 60 years, it represents a significant part of the bank’s history of service to the community.”
Indiana Landmarks and CANDLES first approached First Financial in 2016 about donating the building, which is listed on the National Register of Historic Places.
Ownership of the building will transfer to CANDLES once the restoration is done,12 though Indiana Landmarks will retain a protective covenant.
The only known organization dedicated to the memory of the twin victims and survivors of medical experimentation at Auschwitz, CANDLES’ stated mission is to “prevent prejudice and hatred through education about the Holocaust.”
Through CANDLES, Eva and Miriam have located 122 individual Mengele twins living in 10 countries around the world.  The actual museum opened in in 1995 at another location. It was firebombed in 2003 by an arsonist, but the museum reopened two years later.
The museum, which drew about 12,000 visitors last year, has been struggling with limited space for its exhibits and programs. The new venue is expected to remedy that.
“In addition to being closer to our partner, Indiana State University,” Executive Director Dorothy Chambers said in a statement. “CANDLES will increase the synergy among museums and other arts and culture organizations that already call downtown Terre Haute their home.”