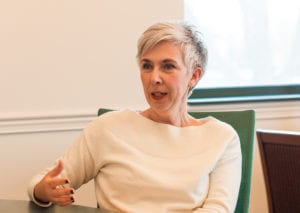 Deborah Frockt, the new CEO of the Jewish Family & Career Services, spells a blueprint for advancing the work of the social service agency. (Community photo by Jessica Budnick)

Deborah Frockt didn’t have to start cold as the new CEO of the Jewish Family & Career Services, and she is grateful.
The Louisville native, who spent the last six years at the Jewish Family Service of Seattle (JFS), spent two weeks in December working with outgoing CEO Judy Freundlich Tiell. She also met with the board at that time, presenting her initial thoughts on moving the agency forward.
This month, she has been in meetings – lots of meetings – with her staff, learning the intricacies of the operation she now leads.
“I think the most important thing in any job is to get to know it from the inside out and from the outside in,” Frockt said in an interview with Community – her first since returning to Louisville.
“No matter how much structure you have around something, there’s just a human intelligence that exists when somebody has the job for a very long time,” she added, “so I’m grateful to Judy, and to the board, for how they planned this transition, to make sure I could get that handoff from her.”
Frockt, who formally started in February, brings diverse experience to her new job.
In addition to her time at the JFS – five years as director of marketing & communications, one as annual giving director – she also spent six years as director of advancement at Seattle Jewish Community School.
The Stanford University graduate also has an extensive background in drama, working as literary manager for both the Seattle Children’s Theatre and Actors Theatre of Louisville, but more on that later.
Frockt’s experience is informing her as she fleshes out a four-point plan of ideas – she prefers “impressions,” since they’re still in development – for the future of the JFCS and its service to Louisville:
• Volunteering and engagement: “The JFCS has the potential to be a central address in Louisville for volunteering,” Frockt said. “What I think people – especially people who are in their 20s, 30s and 40s – desire is a hands-on way to get involved. People do want to see their impact.”
• Family strengthening and stability: Long a part of the JFCS mission, Frockt is eyeing new ways to help families in need that are “more expansive, more comprehensive, more holistic.” Those ways will address counseling, case management and skills building. One example is the JFCS’ new family stregthening programs.
• Multigenerational approaches to aging: Aging affects, seniors and the families who care for them, and both groups need assistance, Frockt said. “Louisville is a city that is growing older. There is a silver tsunami across the country, and we are going to be hit by that even more strongly here.”
• Skilled work force development: Louisville lacks skilled labor at every level, Frockt has been told. “That is quite a challenge, but it is also a great opportunity for this agency. We have been in this work for a long time. We have the know-how to do it; we have the track record; we have the relationships. Growing that part of our work is something that is in our plans.”
Not exactly a fifth point, though “interwoven’ into the first four, Frockt said, is the growing number of “new Americans” in Louisville, and the role they play in growing the city.
“The growth in population in Louisville is coming from people who were born in other countries,” she said. “As the Jewish Family & Career Services, we were founded to help Jewish people from other countries become new Americans, and 111 years later that is what we’re continuing to do.”
Frockt said the JFCS is about helping people, and greater Louisville, reach their “full potential.”
“By having skilled working people, by helping them know where their path is, it fills the gaps in the community.”
Frockt doesn’t come from a traditional social worker background – her college degrees were in English and creative writing. She even wrote and published a play for young audiences, The Book of Ruth.
But nonprofit work is changing, she said, and executives are entering the field from all sorts of backgrounds.
“This model of social workers as leaders is still a very valid model that agencies like this often apply,” Frockt said, “but in nonprofits in general, including social work, there are just as many today who did not come from those backgrounds.”
Asked how her background in the theater can be applied to the JFCS, Frockt cited team building.
“A theater is about team; it sounds a little bit corny, but that’s what it is. It’s about bringing people with discreet, diverse skills together in common cause to do something, and that’s what any community leadership role is all about.
“Producing a play is not about everyone saying, ‘ooh look at the dress she’s wearing in that scene,’” she added, “it’s about the dress making sense for the character in service of the story. That’s how I have always thought a team works, how an organization works. It’s about bringing all those pieces together, all the disparate services, toward a common goal.”
A skilled fundraiser, Frockt said she will approach the task by building relationships with supporters, connecting people whose goals and values mesh with the JFCS’.
“It’s not about money, though it may express itself that way, it’s about really do we have a match?” she said. “Is there a true connection here? In my experience, when it reaches the place of mitzvah, feeling meaningful, it’s not a transactional exchange. It feels like something you’re compelled to do.”