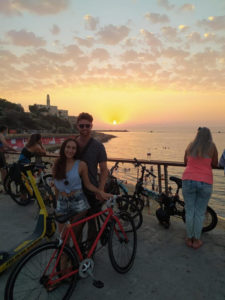 Louisville native Tessa Culbertson, seen here at her favorite spot in Israel, Yafo Beach, with her boy- friend, Eitan Egdes, said she had to avoid this spot during the recent fighting because of the danger to Jews. (photo provided by Tessa Culbertson)

As Tessa Culbertson sat on the balcony of her Tel Aviv apartment, taking advantage of a relative calm in the clash be- tween Israel, Hamas and Arab Israelis, the Louisville native reflected on her first experience under fire.
She had learned what it sounds like when the Iron Dome defense system destroys an incoming rocket from the Gaza Strip.
She got used to scoping out the nearest possible shelter whenever she was out riding her bicycle.
And she lamented not being able to lie on the beach at Yafo because it was simply too dangerous for Jews.
But Culbertson, who made aliya in 2018, had also learned, even before the fighting started, that there were tensions in the country between Jews and Arabs, something she had told her mother on a call home.
“Everything that’s happening now is no surprise to me,” she said.
Culbertson was one of four Jewish Louisvillians to share with Community their experiences during the 11-day conflict. The others were Orli and Ari Feder, who are completing high school there, and Josh Ellis, who is taking a gap year in the country.
The fighting came to an end last week when Israel and Hamas agreed to a cease-fire, or de-escalation of hostilities, which took effect on Friday.
Culbertson, 28, who grew up going to The Temple, the JCC and Camp Livings- ton, said hunkering in a shelter while rockets explode overhead is an experience that defies description.
“It sounded like it was hitting the ground,” she said, “but then my neigh- bor had to explain to me that this is the sound of the Iron Dome intercepting them, but we have to be inside in case debris falls.”
Though her neighborhood wasn’t damaged, a rocket did get through one mile away at Ramat Gan, and she has learned that she has 90 seconds to reach the shelter under her building whenever the siren sounds.
“For most of these rockets, I have been fortunate enough to be at home,” Culbertson said. “I have a dog, so my prior- ity now is to make sure he’s never in the house alone.”
She’s not the only Louisvillian who now knows what it’s like to take cover. Orli Feder, 18, a soon-to-be graduate of Mosenson Elite Academy in Hod HaSharon, central Israel, described how she and her classmates were rousted from their dorms after midnight as rockets from Gaza flew overhead.
“At one or two in the morning, we heard sirens,” she said. “We went outside and we saw rockets in the air and we heard explosions.”
One of the rockets struck an apartment building in nearby Petach Tikvah, she said.
Orli and her twin brother, Ari, daughter and son of Rabbi David and Karen Feder, both plan to come home for one month following graduation. After that, they will return to Israel to start their military service.
Ari is graduating from WIZO Nahalal Youth Village in the upper Galilee, which was out of range of the rockets, but he
saw signs of rioting in nearby Arab villages.
“You could see smoke from the protests,” he said. “In the surrounding area, there are a lot Arab villages nearby that [were] lighting fires and throwing rocks.”
Josh, a son of Drs. Leslie Rice Ellis Jr. and Julie Temes Ellis, a JCL Board of Directors member, said he began his gap year in Israel this past April, staying at a dorm at Ben Gurion University, but they were moved to Hod HaSharon after the rocket attacks began, then again further north.
“I have seen many rockets being intercepted by the Iron Dome and an Israeli right-wing nationalist protest outside BGU, aggravating the Arab student body,” Josh said. “Luckily, I haven’t seen any head-on-head violence.”
He said the student reactions to the violence appear mixed.
“There’s empathy for the Arabs from the international students, but the Israelis have been more or less hostile due to the conservative/nationalist nature of Be’er Sheva.”
The daughter of Mark and Leann, Culbertson said the violence has marred life in Israel for both Jews and Arabs, neither side feeling as safe as they may have before its start.
“I used to spend my weekends on Yafo Beach,” she said. “I can’t go there right now, and that’s hard for me…. I don’t feel safe there anymore. I’m sure many Arabs don’t feel safe in super Jewish areas. It’s so upsetting.”
Which is why she feels empathy for both sides.
“I feel for these people who are hurting, but I’m also feeling for my country that’s been under attack now for 11 days.
“I want peace for everyone,” she added. “I don’t want any more people to die.”

By Lisa Hornung For Community While the pandemic may be slowing down with the help of vaccines, and the world is beginning to reopen, Jewish Family & Career Services has decided to keep this year’s MOSAIC awards virtual. But the …