David Grossman continues to surprise his readers with his latest novel, A Horse Walks Into A Bar. The acclaimed Israeli novelist again addresses grief, society and the individual in sly, roundabout ways.

The story centers on a comedian’s single disastrous nightclub appearance, which begins on a raucous note of hilarity before veering into wildly unexpected terrain. 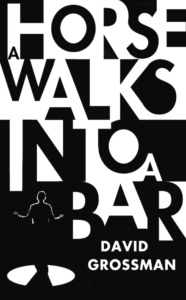 The novel’s chief protagonists are the comic Dov Greenstein, and a reluctant member of his audience, District Court Justice Avishai Lazar. The two have not seen each other since boyhood and Dov’s show provides the unlikely occasion for their fraught reunion.

During the tense evening, we gaze over the shoulders of the audience, watching these two characters struggle to resurrect memories of their earlier bond, which are buried beneath the detritus of the long eventful decades. Just who are they to one another?

Meanwhile, after opening with a thoroughly Israeli routine of macho, ribald banter, Dov’s sudden refusal to deliver more of the jokes his audience anticipates gradually alienates the restive crowd.

Soon, Dov seems at war with his old fans. He teases, insults and cajoles them throughout a bewildering performance that ultimately turns self-destructive or redemptive. We witness the genius of Dov’s artistic control and the wrenching loss of it. Or do we?

Meanwhile, Avishai’s childhood recollections of Dov’s mistreatment by those who bullied him provide jarring interludes, reveries culminating in a remote desert pre-military youth camp where tragic events cause the staff to hastily arrange Dov’s return home without disclosing what awaits him.

At one point, despite his growing anxiety on the long desert drive, young Dov is distracted by the recklessness of the jeep’s driver: “what a terrible driver he is, how he’s veering all over the place, onto the shoulders, into every pothole.”

That may well be Grossman’s sly, metafictional wink at the reader. The novel certainly takes its own detours, twists and turns. Yet while the destination may seem elusive for many pages, every disquieting moment heightens the suspense and ultimately proves psychologically rewarding.

While Mark Twain’s famous adage “Humor is tragedy plus time” has inspired many artists, only rarely has it been turned inside out to such memorable effect as Grossman grippingly portrays the collapse of Dov’s crass and calculatedly cynical stage demeanor to reveal a deeply wounded and troubled psyche it once protected. Precisely when he is seen at his most vulnerable, we meet a second audience member who knew Dov, a mysterious woman whose own tragic, quietly heroic role is revealed to memorable effect.

Though the audience largely abandons the tormented comic by the end of this train wreck of an evening, Grossman’s readers should be transfixed. There are moments when Dov’s abrasive qualities resemble Israel itself, bearing its weighty load of armor – what Grossman once called the sense of “permanent guard duty” – to such a degree that it loses sight of its own human nature. For that seems to be at the heart of this story; the audience, anticipating jokes, becomes squeamish and outright hostile when confronted instead with the naked turmoil of a man’s life.

By the end of this raw and gripping novel, readers may be left wondering whether this emotionally searing performance by a faltering comic is really a sly allegory about the novelist, or any artist brave enough to smuggle some brutal truth into his art.

Might this demanding, increasingly censorious audience be a surrogate for the increasingly unreceptive Israeli public, immured against facing certain truths and impatient with Grossman’s conscientious role as a witness to inconvenient realities, his resolute voice raised against the corrosive injustices of the occupation?

Hinting at but ultimately refusing to directly answer such questions, A Horse Walks into a Bar consistently fascinates.

(Ranen Omer-Sherman is the Jewish Heritage Fund for Excellence Chair of Judaic Studies at the University of Louisville.)

Want to read it?

For Cantor Sharon Hordes and Lisa Flannery, bringing Torah and yoga together in a single class is, as Flannery said, “bringing together two universal truths.” The two led a “Torah Yoga” class, Thursday, February 16, at Keneseth Israel Congregation, Temple …