The Community Foundation of Louisville has announced that local attorney Sheldon “Shelly” G. Gilman is the first 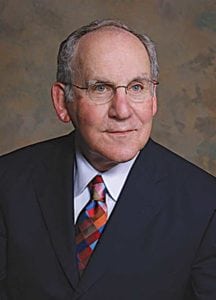 recipient of the organization’s Wilson Wyatt Award. The award was presented on Thursday, June 2, at the CFL’s 13th Annual Professional Advisor Seminar in recognition of Gilman’s role as a professional advisor who demonstrates excellence in philanthropic advising.

Gilman is an active lawyer in the Louisville community at the law firm of Lynch, Cox, Gilman & Goodman PSC, and a leader in Louisville in both the general and the Jewish community. He received his undergraduate degree from Ohio University and his law degree from Case Western Reserve University.

He is admitted to practice law in Kentucky, Ohio, Indiana, Tennessee, Florida, the District of Colombia, U.S. Tax Court, Court of Military Appeals and the U.S. Supreme Court. He served four years as a member of the U.S. Army’s Judge Advocate General’s Corps with duty assignments at Redstone Arsenal, AL, the Office of the Judge Advocate General HQ, Department of the Army and The Office of the Secretary of Defense, The Pentagon, Washington, D.C.

He has received recognition for his outstanding career and is listed in The Best Lawyers in America for his work in trusts and estates and employee benefits law, among many other prestigious titles. Gilman actively serves on a number of committees, including the Kentucky Bar Association’s Ethics Committee and its “Hotline” Committee.

Gilman is also the author of many articles dealing with legal issues, including ethics, trusts, estates, philanthropy and taxes, among other things.

“Shelly has been a great friend to the foundation over the years,” said Mike Schultz, Vice President of Development & Stewardship for CFL. “Whether as a keynote speaker at seminars for regional affiliate foundations, referring clients or merely starting a conversation about philanthropy, he has contributed significantly to the Community Foundation of Louisville’s growth resulting in philanthropic impact in our community and across the country.”

“Shelly lives his life rooted in Jewish values,” said Jewish Community of Louisville President and CEO Sara Klein Wagner. “He is a lifelong Jewish learner, a champion of Jewish education and delights in tikkun olam, doing whatever he can to make the world a better place. By his personal example and with the sound advice he has given to so many in our community, he is the obvious choice for the first Wilson Wyatt Award.”

“Once I got over the shock, I thought why me? What have I done that was so special; what I am doing is what I’m expected to do?” Gilman said of his recognition. As a religious individual, Gilman attributes his “do something” mentality to his upbringing and aspirations to follow what it means to be a good person. Giving back to the community is what he feels he is expected to do, and the award came as a surprise given his charitable guide to life.

Before he would talk about what he has done, he focused on his mentors and those who inspired him.

When Gilman and his wife, Nancy, came to Louisville, he knew no one except her parents. Her father, Samuel Stern was an excellent role model. As an example, Gilman recounted that when Stern’s youngest son, Scott, played on the JCC’s basketball team and they played the Cabbage Patch team, Stern noticed what the Cabbage Patch players were wearing. Stern quickly arranged and paid for new sneakers and uniform for that team.

Stern also noticed that Rabbi Slosberg had a staircase without a railing in his home and took care of that as well. In addition, Gilman recalled his father-in-law was known to buy turkeys for those in need.

These are just a few of the many kindnesses Gilman witnessed over 15-20 years. Stern’s “commitment to helping other people had an influence on my own life,” he said.

A pivotal moment for Gilman came when Stern worked with Stuart Schulman, z”l, to create the Samuel and Blanche Stern Fund, Gilman had the opportunity to “observe how all these wonderful funds do things to help people.”

For him, the next logical step was to ask his clients if they would like to include something for charity in their estate planning. “Surprisingly,” Gilman noted, “90 percent said yes. It became a pleasure to work with them to design, to create, to plan out the structure of what they wanted to do,” and that planning often involved their families.

In addition to his professional activities, Gilman has served as a member of the Boards of Directors of the Jewish Community Federation and chaired its Foundation for Planned Giving and its Education Committee. He also co-chaired the 2002 Federation Emergency Terror-Relief Campaign for Israel with Kim Frankenthal.

The Gilmans have two sons, Stephen and Scott, and as a reflection of their commitment to Jewish values and tzedakah, they created endowment funds honoring their sons.

Stephen, who is a researcher at NIH (National Institutes of Health), works to combat depression and suicide, is a graduate of Eliahu Academy, St. Francis High School, Tufts and Harvard, but the only certificate that hangs on his office wall is from Eliahu. To honor him, the Gilmans created a Day School fund. Since Louisville no longer has a Day School, they have repurposed the fund to provide scholarships for trips to Israel.

Scott, a consultant in the internet business in Austin, loved Camp Ramah, so the Gilmans created a counselor’s fund to honor him.

Achieving his goal to set a positive example of someone who gives back to their home community, Gilman said, “I want to thank everybody for thinking of me,” and that the experience of winning the Wilson Wyatt Award was wonderful to share with his best friend and wife, Nancy, who shares the same charitable values. His overall encouragement of philanthropic goals has made a significant impact on the community of Louisville and beyond.

The Wilson Wyatt Award is named for the co-founder of the Community Foundation of Louisville and honors a philanthropic-minded professional advisor who is committed to giving back to the community. Gilman has worked as an estate planning attorney in Louisville for more than 40 years and is dedicated to keeping his clients aware of philanthropic efforts and accounts they can create with the Community Foundation.

The Community Foundation of Louisville, founded in 1984, is the largest charitable foundation in Kentucky with over $448 million in assets and more than 1,370 different funds, each with a charitable purpose defined by the donor. In 2015, the Community Foundation made over 10,500 grants totaling $49 million to local, national and international nonprofits. Working together, the Foundation, its donors and community partners leverage collective knowledge, creativity and resources for a greater impact than any of us can make alone. For more information, visit www.cflouisville.org.

Editor’s note: Some of the information in this article came from a CFL press release.