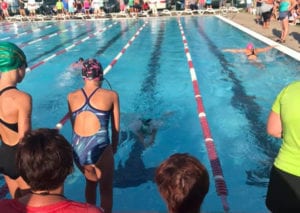 A Gator swimmer prepares to dive in during a relay event at this year’s LSA Championship in Oldham County. The Gators won their third straight Division title and will step up to Division II next year. (photo provided)

It wasn’t even close at this year’s Louisville Swim Association Championship.
The J Gators won the July 11 meet at Oldham County Aquatic Center by more than 400 points, easily outpacing second place Oldham County Parks by a score of 2,543.5 to 2110.
The rest of the teams were Tom Sawyer, 1,992 points; Locust Creek, 881.5; Bridgepoint, 775; Wildwood, 549; and Shelbyville Country Club, 530.
For the Gators, who competed in age groups from 7-8 to 13 and up (boys and girls), it marked their third-straight LSA championship and the right to move up next year from Division III to Division II.
Aquatics Director Johnny Kimberlin said the move means stiffer competition for the Gators, who will compete in 2020 against swim teams of comparable size and depth, but they are ready for the challenge.
“I still think we’ll compete at a high level in Division II and possibly win,” he said, “but I don’t want to sound too overly confident.”
This year’s championship marked the last meet as Gators for three senior swimmers. Ellen Kuhl, Abby Brodsky and Eli Partin have been with the team since they were 9 or 10.
“This is like their second home, said Kiley Handley, head coach of the Gators. “They really are strong leaders and did really well. All three were in the top 8 in their events.”
Yet it was some of the youngest Gators who made the biggest splashes.
For instance, girls in the 9-10 age group won all five events between them. Delaney Sullivan, 10, won the 25-meter freestyle, the 100-meter individual medley and the 25-meter butterfly.
And Lilly Chaney, also 10, won the 25 meter backstroke, the 25-meter breaststroke, and she took second in the 100-meter individual medley.
“They were so dominating,” Handley said. “Both of them won by a landslide. No one was even close to them.”
Ella Reis, 13, won the 100-meter freestyle in the 13 and up age group, beating several older, possibly more experienced girls.
But the most exciting race of the day probably came in the 7-8 boys age group where the relay team, anchored by Grayson Lassere, won the freestyle in a thrilling competition that came down to the final second.
“Bridgepoint was ahead in the last five meters,” Handley said, “when Grayson came from behind, touched time out and won a by a tenth of a second.”
Many parents celebrated the Gators; victory. One of them, Tracy Hirsch Geller, took to Facebook to express her joy.
“Seven years ago, I signed the girls up for JCC swim team because I needed one more hour of “coverage” after camp,” the mother of two wrote. “I had no idea that would be one of the best decisions I ever made for our family. We just finished summer 2019 as Division 3 champions but there’s no trophy that means as much as the friendships we have gained along the way. Love our Gator family!”