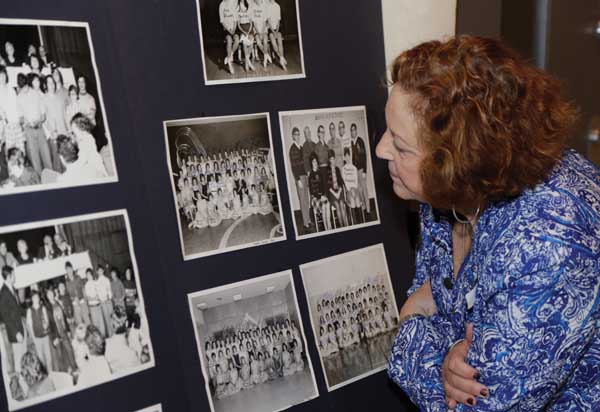 When 2014 Federation Campaign Chair Doug Gordon announced the Happy Days Are Here Again event for community members age 65 and older, he made several promises: This would be a Campaign event unlike any other in recent memory, it would be fun and that people would be able to make their Campaign pledges that night like they would have at an old-fashioned Campaign event of years gone by. He kept his promises.

People arrived to find the Jewish Community Center auditorium filled with old photos from years gone by. Culled from JCC and Community newspaper archives, those in attendance went from display to display looking for pictures of themselves and their friends and sharing memories of the times when the photos were taken.

They also had the opportunity to greet and share with old friends, some of whom they hadn’t seen in a long time. And of course, no event is complete without good Jewish food, including bagels, cream cheese and herring.

The formal program, which Gordon emceed, added to the fun. A trivia game included questions like list some Jewish delis and bakeries that have long since closed and some of the Jewish teen clubs that existed long ago. He also recruited a group of old timers to share some Jewish jokes.

When it came time for the Campaign message, Gordon was straightforward. He reminded that people really came to this event to raise money. “When we publish the pictures and tell the stories and share with the community what we had,” Gordon said, “I just want to be able to say that everybody here participated and made some kind of gift.”

Those in attendance responded to his appeal. That night, the group pledged $163,175 to the 2014 Federation Campaign.

As people left, some were overheard saying that they hope there would be more fun-filled Campaign events like this one in the future.

AJ honors “Ageless Wisdom” of elders In 2011, Adath Jeshurun Synagogue’s Ageless Wisdom Committee, chaired by Janet Levitan, wanted to find a way to honor congregants 80 years of age and older. At the time, Levitan said she knew from …

[by Dr. Lee Shai Weissbach, Special to Community] Keneseth Israel Congregation will host Joey Weisenberg, creative director of the Hadar Center for Communal Jewish Music, as its musician-in-residence, made possible by The Dave and Reva Waldman Kahn Fund for Jewish …