Ronda Christine Allgeier Gordon was a courageous person. For eight and a half years, she battled cancer, but her 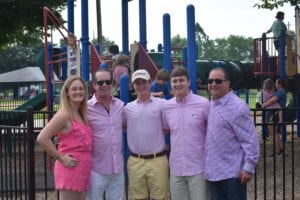 zest for life meant that she continued to live life to its fullest.

“She was just 50 when she died,” her husband, Michael Gordon said. “She did a lot of things for a lot of people … and never asked for anything in return – just friendship and camaraderie. She liked adventures and wanted people to have fun and savor the good things in life.

An avid sports fan and traveler, she visited all 30 Major League Baseball stadiums and could often be found at University of Louisville games.

For many years, Michael worked for Gus Goldsmith at his pawnshop, and that relationship turned into friendship. When Ronda died, Goldsmith suggested doing something in her memory.

They contacted Stacy Gordon-Funk, the Jewish Federation’s vice president of philanthropy who told them that the playground behind The J needed some improvements including a fence around the playground equipment near the ball fields. “We both thought it was a good idea,” Gordon said.

So the two friends made a donation that covered the fence and set aside money for future projects as well.

The Gordons have two children, Mitchell and Kyle, and Michael recalled, when they were young, Ronda used to bring them to The J. It was something special.

With this gift, Goldsmith and Gordon have made the playground safer for the children and the fence they added is beautiful.

“The J is grateful for the generosity of Gus Goldsmith and Michael Gordon,” Gordon-Funk said. “Their gift is a wonderful tribute to Ronda and a real asset for The J.”

What do Elvis and 39 siblings have to do with each other? They all perform shows on stage in the theatrical city of Branson, MO. The J’s seniors took a trip to that famous city on June 6-10, and got …