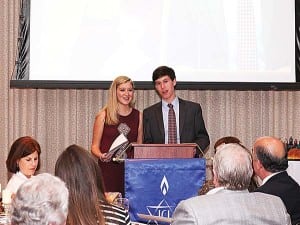 There was a buzz of excitement in the air at the Jewish Hospital Rudd Heart and Lung Conference Center on Sunday, December 13, when Jewish community leaders arrived for the Stronger Together 2016 Federation Campaign Major Gifts dinner.

This was the first major event of the 2016 Campaign.

Thanks to the Double Your Impact Challenge, provided by the Jewish Heritage Fund for Excellence, the 2016 Campaign has the potential to raise $400,000 more than it did last year. JHFE has promised to match every new or increased gift to the Campaign, dollar for dollar, up to $200,000. Jewish Hospital hosted the event.

It is the start of the first Campaign since Sara Klein Wagner became president and CEO of the Jewish Community of Louisville. Leon Wahba is chairing the Campaign.

All of these plusses along with other inspirational programming combined to make the evening a success. The Campaign raised $700,000 at the dinner, and, Wagner announced that these gifts helped the Federation reach the halfway point of the Double Your Impact Challenge, bringing the total to $100,000 in Wahba led off the evening, calling the event a celebration of the vibrancy of Jewish life in Louisville and thanking those in attendance for the support they provide to help fund the community’s programs including religious schools, Chavurat Shalom, the JCC, summer camp, PJ Library, Hillel, Jewish Family and Career Services, the Jewish Community Relations Council and more.

Jewish Hospital President Joe Gilene welcomed everyone, saying, “We are all honored and privileged to have the honor to give back to this community under the wonderful name of Jewish Hospital.”

JCL Board Chair Jay Klempner said the JCL is moving ahead and addressing its issues. He called on those present to support the community “both financially and out in public, being ambassadors for … our Jewish community.”

KentuckyOne Health Vice President of Mission Rabbi Dr. Nadia Siritsky led the assembly in lighting the Chanukiah. “Tonight is the final night of Chanukah, so we celebrate all miracles, “ she said. “One of the miracles that I am so grateful for is our special relationship with the Jewish community.

“In particular,” she continued, “we connected our Paths in Action program, which is a that program teaches teens about dating violence. We have connected them with BBYO and all year they’re learning from each other and they’re working together to build a program and event that will help serve our whole community.

“That’s just one example of the many things that we are pledging to continue to build as we strengthen our community as we work together as the joint team of Jewish Hospital and the JCL,” she concluded.

Before leading the Motzi (blessing the bread before the meal), Rabbi Robert Slosberg, the president of the Louisville Board of Rabbis and Cantors, and after quipping that he was an “Ambassador Ross groupie,” called the positive changes Gilene has brought to Jewish Hospital and the collaborative efforts of the JCL miracles. With all parts of the community working together, he said, “we will build on the concept of stronger together and you will be amazed at what this Jewish community can accomplish.”

He encouraged all present to give generously and closed with a story from Prof. Moshe Davis, z”l, “A candle is a small thing, but one candle can light another and see how its own light increases as the candle gives its flame to the other. My challenge to you is to be such a candle tonight and during this year’s Federation Campaign let’s light some candles of support starting with this evening and let the flame spread.”

When Wagner came to the podium, the assembly gave her a standing ovation. The JCL president and CEO presented a synopsis of where the JCL is today and the steps the agency is taking to ensure the future of Jewish life in Louisville. (See story)

In testimony to the effectiveness of Jewish programming in Louisville, two teens who are active in BBYO shared their personal stories.

Jacob Finke, who was chosen as a Bronfman Fellow, an international program that provides a small group of teens a five-week seminar in Israel and several other Jewish learning opportunities, said, “The JCC has given me a lot. It gave me a place to go as a child that wasn’t boring, it gave me a gym to work out at during my weight lifting phase, which was very brief. And it gave me my first job. Though more than any of those things, the JCC connected me with my Jewish identity. My initial steps toward feeling Jewish were through BBYO.”

Jessie Hymes talked about the BBYO experiences that gave her leadership opportunities locally and regionally. Last summer, she participated in an international BBYO program. “My group was a close knit group of … 30 American and 40 international teens from Bulgaria, Serbia, Turkey and beyond. For 12 days, I learned about the Bulgarian society, took part in community service projects and formed new friendships.”

Although members of the group spoke 10 different languages, they managed to communicate and form lasting friendships. After returning home, the language barrier became more of an issue over social media. Determined to maintain the connections she had made, Hymes organized a six-day regional fundraiser, and as a result, was able to bring some of the international teens to the U.S. for a convention in October.

As the featured speaker, Ambassador Ross presented an overview of his book, Doomed to Succeed: the U.S.-Israel Relationship from Truman to Obama. Loaded with details and laced with humor, Ross analyzed how the relationship has changed from administration to administration and why he believes it will endure. (See story, this page.)

Jane Goldstein announced that the community has a new Lion of Judah, Shiela Steinman Wallace, and both encouraged all those present to increase their commitments to the Campaign.

Laurence Nibur, who also increased his pledge, was inspired by a meeting of the Young Adults Ambassadors program that convened that morning with “eight brand new young adult leaders in the community who are here because they get that” Jewish community matters.

Just as we are poised to celebrate the beginning of a secular New Year filled with new possibilities and new opportunities, we will begin to once again visit the next book in our Torah cycle, the book of Exodus, Sefer …

At the packed, buzzing opening reception for the juried Annual Mazin Art Exhibit in the Patio Gallery on Sunday, November 22, many people paused and pondered in front of the first prize-winning piece, “Fusion.” The enigmatic earth-toned multimedia work shows four conical …

Every year the Ida and Bernard Behr Holocaust Memorial Education Fund sponsors a free trip to the United States Holocaust Memorial Museum. Participants attend pre- and post-trip sessions to prepare for and debrief from their experience. This year the trip …