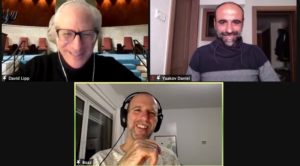 A screenshot from Sunday Night Live program with the stars of Fauda.

By Lee Chottiner
Community Editor
In Fauda, the hit Israeli drama series, an elite unit of Israeli Shin Bet agents operates in Palestinian cities, breaking up terrorist rings and thwarting dark operations.
But two of its co-stars, Boaz Konforty and Yaakov Zada Daniel, say the impact of the series, which is preparing for its fourth season, runs much deeper in Israel and the Palestinian Authority.
Speaking Sunday, Jan. 17, on Adath Jeshurun’s Zoom program, Sunday Night Live, Konforty and Daniel said the program is changing the way Jews and Arabs see each other, humanizing the other side, even if viewers from one side don’t always agree with the other’s politics and tactics.
“It’s not about the Israeli-Palestinian conflict,” Konforty said. “It’s about the people.”
In Fauda – Arabic for “chaos” and the distress signal that agents use when they are in danger – Daniel plays Eli, the field head of the unit who is brought back from Europe to take over after his predecessor is killed in action. Konforty plays Avichai, the sniper who provides cover for the rest of the team while it conducts its operations.
The show, which is produced in Israel, has garnered international acclaim (and sometimes criticism) for its realistic depiction of Israel’s special-operations units and for its empathetic depictions of Palestinians, both civilians and militants.
Interviewed by Cantor David Lipp, a big fan of the show, the actors spoke about their own backgrounds, how they got their parts and what they brought to their roles. They also dispelled a few misconceptions the show makes about real life agents.
For instance, Daniel, who served in such a unit before going into acting, said real operations are done more quickly than those on the show because of the danger. “In the show, you can see we’re staying a long time in Gaza, in an Arab village,” he said. “In real life, it’s not happening.”
And Konforty said women are not part of the unit, again because of the danger. So, a scene like one from season 2 when Nurit, the lone woman in the unit, is cornered on a rooftop by an angry mob that assaults her, would not happen.
“The idea of a woman [held] in captivity by the Arab guerillas is problematic in Israeli eyes,” he said.
Fauda is giving Israeli and international audiences an appreciation for the lives of these undercover agents and the personal challenges they face. Post-traumatic stress is one; juggling their secret military lives with their home lives is another.
Asked by Lipp what their favorite scenes from the show are, both actors chose the same short clip from season 2: nighttime at their hideaway after an especially dangerous operation. Avichai sits in front of a fire drinking tea. Eli comes out and sits next to him, sharing a bonding experience.
“It’s a very quiet, very small scene, but I love it,” Konforty said. “I think it represents the twilight zone between being a soldier and being a civilian. Avichai can’t go home before making an adjustment from what he’s just been through…. So, he just sits there.
“That’s one of the aspects [of the show] that’s very interesting to me, how these characters combine their military world with their civilian world,” he continued. “When I was a soldier, I was a full-time soldier; the civilian aspect wasn’t something I had to cope with.”
The cast of Fauda is a cross-section of society. Arab actors play Arab roles; Jewish actors, Jewish roles. Each group brings its own experiences to the parts.
But sometimes, there are gaps in the experience. Language for instance. In Israel, Jewish actors aren’t nearly as proficient in Arabic as the Arabs are in Hebrew.
Konforty especially sees that as a limitation
“We learn our lines phonetically,” he said. “I wish I learned Arabic, then I could improvise in the scenes.”
But Daniel, whose Arabic is better because of his actual service in the unit, said the show has inspired many Israelis to learn the language.
“Arabic became a very sexy language in Israel because of the show,” he said. “I’m very happy it happened because, like Boaz, I think Arabic is a must in Israel.”

(All three seasons of Fauda can be streamed on Netflix.)

The Louisville Jewish Archives Committee is seeking help from Community readers to identify photos from its collection, which depicts 100 years of the JCC (formerly the YMHA), Federation and other Jewish institutions. The photos will be retained by JCC, but …