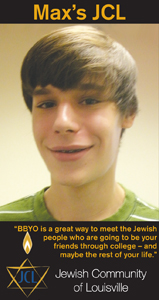 At first glance, Max Oppenheimer is a typical Louisville teen. He is a junior at Manual High School in the High School University program and a member of the school’s swim team. He enjoys hanging with his friends and just having fun.

He knows college is just around the corner, but he hasn’t begun his search in earnest yet. He’s thinking about studying “something in the science field,” and is considering pre-med, but, like many high school juniors, he’s not ready to commit.

But Max has another side. He is an active BBYO (B’nai B’rith Youth Organization) member and a leader who invests his time and energy in making this vital Jewish teen program as strong as it can be. Currently, he is s’gan (vice president for programming) of the Jay Levine AZA chapter.

“Right now,” he explained, we’re focusing more on social and fun programs that get kids into BBYO. Once we have a larger group, we’ll incorporate more meaningful educational programs.” Recently the group went “paintballing.”

Including Jewish content, however, is important, too. Earlier in the year, they also had a couple of sleepovers that included Havdallah services on Saturday night.

Max and the other chapter officers have also been pushing members to attend KIO (Kentucky-Indiana-Ohio) regional conventions. “I’ve been to two regional conventions,” he said, “and both were a lot of fun. There was programming most of the day and services Friday night and Saturday morning.”

There’s also plenty of free time at these gatherings, which Max says is a good thing. “It’s a good time to get to know new people whom you haven’t met or want to get to know better and to make connections to people who don’t live in your city.”

For Max, BBYO in Louisville is “having something to do on the weekends. It’s great way to spend a Sunday when I don’t necessarily have anything else to do.”

“BBYO is like a project for me and a lot of the board,” he continued, “to revive it to the BBYO that our parents had, when it was a lot stronger. We’ve all been working hard.”

Max will carry his BBYO experience with him for the rest of his life. “I’ll definitely want a college with a Jewish fraternity,” he said. “That will definitely be a big part of my college experience, and I would bet a lot of the friends I’ve made through BBYO are also interested in similar colleges.”

BBYO is a program of the Jewish Community of Louisville and is supported by the JCL’s Annual Campaign.