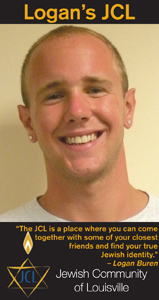 Why does he keep coming back? “Mostly it’s the kids,” he said. “I’ve had the same kids since they were in kindergarten, and now they’re going into the third grade. It’s cool to watch them grow up and become the children they are today.

“They watch everything you do,” he continued, “and you’re a role model.”

For Logan, JCC camp means fun. His favorite activities are the field trips and an Israeli game called Gaga. “The people who work there are really great,” he added.

Logan was also a member of BBYO for three years during high school. He served his chapter, Drew Corson AZA, as s’gan (vice president) for a year, and went to several conventions including Kickoff, Regionals and Kallah.

This fall, he’ll be attending the University of Kentucky, where he plans to major in communications.

He attended Ballard High School, where he was in Beta Club and chorus. There, he made honor roll all four years and graduated with a 3.9 GPA.
He and his family are members of The Temple.

Logan is the son of Pam Feinberg, and he has an older brother, Justin.