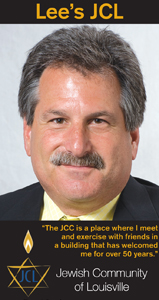 Early in the morning, Lee Benovitz can often be found at the Jewish Community Center enjoying a brisk game of racquetball before heading to work.

The Jewish community is important to him and he wants the Jewish Community of Louisville (JCL) to succeed, but his first priority is the JCC. “I’ve been going there for over 50 years,” he said, “and I’ve always felt welcomed by both members and staff. I hold a lot of fond memories from being a camper to today.”

“The JCC does more good than people realize,” he added, “but only if you participate can you see what opportunities are there. I encourage everyone to find a way to take advantage of what the Center has to offer.”

Benovitz’s family history with the JCC extends back over a century, from his grandfather Ale Bornstein, who built the Dutchmans Lane building “through every other relative who has spent time at the JCC.”

Today, he observed, the JCL is one agency working to ensure the future of the JCC and Jewish life in Louisville.

Last week, as he was leaving the JCC, he observed three women “about 20 paces ahead of me, walking down the hallway, hand in hand.” Three generations, each with “their own place to be.” They dropped the child off at the arts and crafts room; the grandmother headed on to join a senior adult activity; and the mother went to exercise.

“Three generations together in one building,” he said. “I don’t know where else one can find this range of programming under one roof except the JCC.”

He has served on the Federation’s Planning and Allocations and Nominating Committees and the JCC’s House Committee.

In addition, is a member of B’nai B’rith, AIPAC (the American Israel Public Affairs Committee), The Temple and Keneseth Israel.
Professionally, Benovitz is president of OVASCO Industries, a Louisville-based company, which is an importer of flexible packaging and a recycler of textile waste. He also serves on the Boards of two trade associations.

Benovitz’s wife, Amy, is also a community leader, who organizes tikkun olam projects for the community including Merry Mitzvah projects and Habitat for Humanity builds.

The Benovitzes have two adult children, Nancy and Emily.