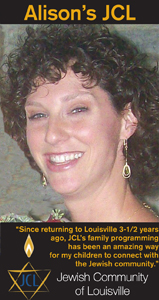 After graduating from Ballard High School, she earned her bachelor’s degree from Miami of Ohio and her Masters from the University of Tennessee, Knoxville.

With her parents, Gail and Betty Pohn, as role models, Roemer grew up knowing that participating actively in Jewish life in the community and accepting leadership roles are the way things ought to be. Her father served as president of Jewish Family & Vocational Service (today, Jewish Family & Career Services – JFCS) and chaired the Federation Annual Campaign for two years; and her mother is a past president of National Council of Jewish Women.

She took those lessons to heart. While she was in Knoxville, she was the assistant director of the Jewish Community Center’s Day Camp. She also spent some time in Cincinnati, where she was the city director for BBYO.

Upon returning to Louisville, Roemer immediately became active in the Jewish community. She participated in the Jewish Community of Louisville’s Young Leadership Development program, interned on the JFCS Board and chaired its Family Mitzvah Committee. She’s still on that committee and is on JCL’s The PJ Library Committee, too.

Professionally, she is assistant director of The Temple Trager Early Childhood Education Center and had served on the school’s parent committee before that.

Roemer appreciates the opportunities the Jewish community has offered her since her return. “The Jewish Community of Louisville is where I’ve made some of my closest friends,” she said.

Her husband, Doug, is also active in the community. He serves on the JFCS Board.

The Roemers have two children, Kyle and Katie.