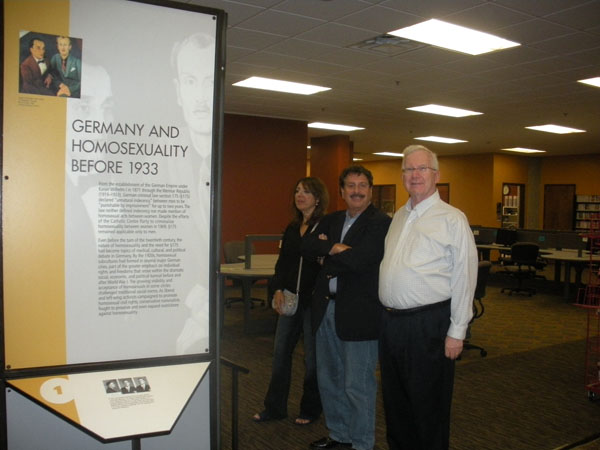 The U.S. Holocaust Museum’s not-to-be-missed traveling exhibit, “Nazi Persecution of Homosexuals, 1933-1945,” is on display at the University of Louisville’s Ekstrom Library now through November 28.

Included are more than 40 panels of information, including reproductions of some 250 historic photographs and documents, that examine the rationale, means and impact of the Nazi regime’s attempt not only to eradicate Jews, but also individuals identified as homosexual, lesbian, gay, bisexual and/or transgender. Nazi policies and practices left thousands dead and shattered the lives of many more.

At the exhibit’s opening on Wednesday, September 21, the JCL’s Jewish Community Relations Director, Matt Goldberg, said, “The exhibit provides a starting place for conversations and classroom lessons that focus on ending oppression and fostering a better understanding of Martin Luther King’s belief that “injustice anywhere is a threat to justice everywhere.”


Goldberg acknowledged the university’s Brian Buford, Tocarra Porter, Ed Segal and Bruce Gale and his sisters, Terrie Gale and Barbara Gale Pass, for their efforts in bringing “this fine exhibit” to Louisville. He especially thanked Jewish Hospital HealthCare Services, which generously provided funding for the project through a Jewish Community Excellence Grant.

Goldberg concluded, “We would like to thank the United States Holocaust Museum, which continues to create exhibits like this that ensure the stories of the victims are not forgotten and the lessons of the Shoah can continue to be taught everywhere and forever. Prejudice and discrimination in any form must be confronted. Wherever discrimination exists, you will more than likely find the Jewish community joining the battle in opposition.”

Sponsors of the display include the Annette and Joseph Gale Fund, the Jewish Community of Louisville, Jewish Hospital HealthCare Services, the Commission on Diversity and Racial Equality, the UofL Student Government Association, the Office for LGBT Services and University Libraries. More information can be found at http://louisville.edu/lgbt.