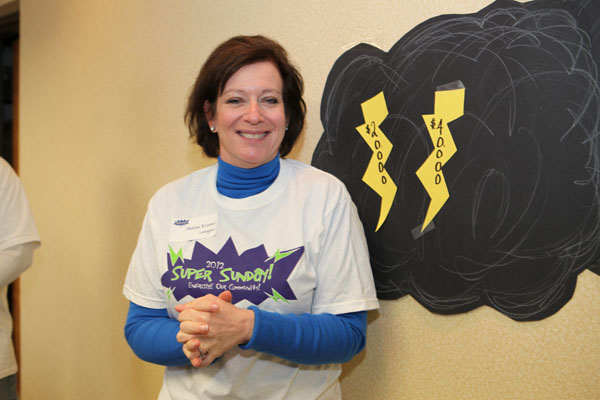 With the theme “Energize Our Community,” a dedicated cadre of volunteers took to the phones on Sunday, February 19, to make the Jewish Community of Louisville’s Super Sunday a rousing success, raising $120,000 for the 2012 Annual Campaign, five percent more than the same gifts last year.

More than 50 volunteers kept the phones busy in the Board Room at Shalom Tower from the start of the first shift at 10 in the morning until the end of the third shift at 9 p.m.

“It was a pleasure serving as chair of Super Sunday 2012,” said Helene Kramer Longton. “It was exhilarating to watch our phenomenal volunteers work the phones to tell our great story and line up new support for the world of good we do.”

This year’s volunteers were great listeners, too. They gave donors a chance to share what they think about the JCL in addition to asking for their support for the Campaign.

“For me, the most exciting moment was shortly after 2 p.m., when the phones were about to close for the afternoon session,” Kramer Longton said. “We were down to the wire and just shy of raising $100,000. Within seconds, 2011 Campaign Chair Ralph Green persuaded a great donor to increase his contribution by 20 percent. It was awesome. Ralph’s brilliant work put us over the top!”

Everyone who came worked hard on behalf of the Campaign. One brother and sister team, Bailey and Matthew Haskell worked all three shifts.

While the work was serious, there was also time for food, candy, prizes and fun. The Cardinal Bird showed up with University of Louisville cheerleader Nicki Henry during third shift. She worked up a few special cheers for the third shift callers with JCL CEO Stu Silberman.

Lt. Gov. Jerry Abramson took time out of his schedule to make some calls, too, as he does every year, as did Jewish Family & Career Services Executive Director Judy Freundlich Tiell and a number of JCL Board members. And, of course, it wouldn’t be Super Sunday without Ruthie Passamaneck’s tuna salad.

Some students from the High School of Jewish Studies stopped by to make thank-you calls to generous community members who had already made their pledges.

“Thanks to everyone who helped make this day a success,” Kramer Longton said. “We appreciate every volunteer who made a call, looked up phone numbers, kept the tallies and help with the preparations. We also appreciate our generous donors who made this day a real success.”

If volunteers did not reach you on Super Sunday, there is still time to make your pledge. Click here to make a pledge, click here to pay a pledge, call 459-0660, or send your pledge or check to Jewish Community of Louisville 2012 Federation Campaign, 3600 Dutchmans Ln., Louisville, KY 40205.

The JCL Annual Campaign supports Jewish Family & Career Services, Louisville’s Jewish educational agencies, and the JCL, which includes the Jewish Community Center, Hillel, the Jewish Community Relations Council, the Florence Melton Adult Mini-School, YAD, Community and more. It also helps us fulfill our obligation to Jews at-risk in Israel and around the world. For more information, look over our website or call 459-0660.