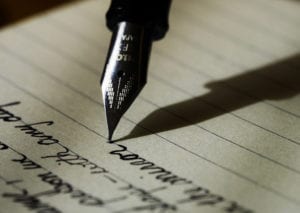 One wrote a letter to her “soon-to-be ex-husband.” Another wrote to “my student who dropped the F-Bomb.”
Others wrote to doctor, therapist, “crush,” dad, mom, lost friend, police officer, stranger, lost-and-found sister.
The letters – and writers – poured out anger, sadness, grief, humor and many mixed emotions. All were personal and revealing.
None of the letters were mailed.
Eighteen women read their letters to an audience of about 130 at the J on Saturday, March 2, for a one-time-only (for now, at least) performance of “The Letter I Never Sent.” The women had submitted their letters in response to an invitation from The J via social media, radio and print to “Stop wishing you had said something . . . Get on stage and actually say it!”
They did.
Some women – no men responded – paused for a tissue break. Some paused to compose themselves. Writers and audience paused intermittently to listen to live performances of songs with themes that echoed those in the letters.
The letters were packed with emotions, confessions, apologies, accusations, lessons and expressions of love.
Betty (not her real name) told her “soon-to-be ex-husband” how angry she felt about his behavior during their marriage, but she admitted making the mistake of “desperately” wanting “to be the person to save you from yourself.” As if to slap a stamp on the letter, she ended with a sarcastic, “Sayonara, sweetheart.”
Fighting back tears and pausing to compose herself, Jenni Lohrey read her letter to her deceased mother, telling her she hoped “to be the mother that you were to me” and apologizing for fussing when her mother wanted to touch her pregnant belly.
“If you were here now, I would let you touch my belly as much as you want,” Lohrey wrote. She also let her mother know she had learned to say, “I love you.”
Andrea (not her real name) wrote a different kind of letter to her mother, explaining angrily how the parent’s “conditional love” and favoritism had emotionally scarred her.
“I’m still learning that I don’t need approval from anyone but myself,” Andrea wrote, adding that she had “learned to forgive and move on.”
Gwendolyn Evans forgave her father for the pain, anger and self-doubt she carries and for his continuing refusal to acknowledge her.
“I love you, and I forgive you, but I am done chasing after you,” Evans wrote. “I know that I am smart, beautiful, intelligent, loving, talented and wise enough to know that it is your loss and not mine.”
Intense as most of the letters were, there were some light moments, too.
Darian Vasquez, age 13, wrote a whimsical, charming letter to her would-be sweetheart – her “crush.” And Mindy Badia’s tongue remained firmly in cheek as she delivered a lesson to her “F-bomb student” in Spanish 1 class – substituting “Smurf” for the F-word and explaining when the F-word was and wasn’t appropriate.
Anger dominated Carly’s (not her real name) letter to a younger sister who had disappeared for five years. “I was convinced you were dead,” she wrote. The sister finally called – collect – to ask a favor, and eventually returned home. Abandoning her withering tone at the end of the letter, Carly confessed, “It scares me to love you, but I do, anyway.”
Ten years after her sister committed suicide, Christine O’Hara described and displayed a wide range of emotions, dominated by deep sadness and loss. “Did I tell you I love you on that last day?” she asked. “We were supposed to get old together,” she cried. “I want you here. I want to make more memories,” she insisted. “How could anyone … call you selfish,” she shouted as she dismissed those who had blamed her sister for choosing to end her own life. “I want people to remember how you lived, not the manner in which you died.”
Lauren Nallia poured anger liberally as she wrote to a doctor she remembered having blamed her for a mysterious illness he was unable to diagnose. Rhythmically, bitterly spitting out statements, each starting with “Dear doctor,” Nallia fumed at her physician for telling her, “It’s all in your head.”
Nallia wrote, “Those encounters with your disbelief have enveloped me with anxiety.” She ended with a verbal slap in the face: “Dear Doctor: You gave up.”
Katheryn Wilson’s therapist didn’t give up, and Wilson thanked her tearfully for talking her out of suicide. “Your words saved my life,” Wilson wrote. “Thank you for keeping me alive…. I truly thought 21 would be my last year on Earth. You gave me nine more years.”
Christina Iliff gave herself a good talking-to in her letter to herself. She apologized – “I’m sorry I have let you down”; she blamed herself – “Your status as a woman is dependent on the love of a man”; and she accused herself of “self-sabotaging,” with a harsh judgment – “I hate who you’ve become.”
However, at the end of her bruising self-condemnation, Iliff admitted in the letter, “I love you.”
Finally, Sharon Cummings, offered her two granddaughters this loving advice: “If you only look around, you will be found.”
Considering the setting for these letters, Cummings just as easily could have concluded, “If you only write it down, you will be found.”
These authors wrote it down. They found missing parts of themselves, and they – along with their audience – were richer for it.