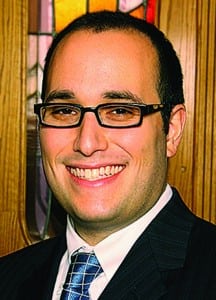 Moses has had enough.
Leading hundreds of thousands of grumbling Jews through the desert is just too much for one man. So, in this week’s parashah, Behaalotecha, God instructs Moses to gather 70 elders of the people in the Tent of Meeting. There, God will rest His spirit on them so that they may assist Moses.
Then we read about two men named Eldad and Medad, who were not part of the group of 70. God’s spirit rests on them as well, and they begin to speak on behalf of God to the people.
Moses’ disciple, Joshua, is furious. He implores Moses to stop them. To Joshua, these two men represent a threat to Moses’ leadership that must be quashed.
However, Moses has a very different response. “Would that all the Lord’s people were prophets, that the Lord put His spirit upon them! (Numbers 11:29).”
Even in the face of a strange and unexpected event, Moses is able to show the humility that made him such a strong leader. He knew that having more people speaking on behalf of God was good for the Jewish people.
Today, we do not have prophets who speak God’s word in the same way as Moses or Eldad and Medad, but each synagogue does have people who communicate God’s words to the congregation. These are the Torah readers, or leyeners in Yiddish. They have learned the musical system known as taamei hamikra (cantillation or tropes) and have studied enough to apply the music to the text of the Torah. All this preparation gives them the skills to “perform” God’s words as recorded in the Torah for Jewish people millennia after Moses first spoke them.
A traditional, but unprovable belief is that God taught Moses how to chant the Torah while Moses was on Mount Sinai. The biblical book of Nechemia describes a public reading of the Torah, and rabbinic commentary assumes that the reader chanted with some amount of regular melody.
The Torah tropes as we have them were codified by the Masoretes of Tiberias in the 10th century. By the 13th century, they were universally accepted in the Jewish world.
While Ashkenazim, Sepharadim, and other groups of Jews, may assign different melodies to the different trope symbols, the tropes still serve the same purpose of showing the reader how to accent words.
As a child, no class or book helped me learn the stories of the Torah as much as being able to chant them in the original. As a rabbi, one of my most satisfying experiences is teaching adults how to chant from the Torah because they are transformed from spectators to active participants in telling the Jewish master-story.
Each community chants the Torah in a slightly different way. At Keneseth Israel, we follow what is known as the triennial system, reading one-third of the traditional parashah each Shabbat, allowing more people to participate.
Most rabbis and cantors would love to see more congregants involved with leading services. Like Moses, I often say to myself, “Would that all the Lord’s people be Torah readers.”
I encourage you to consider learning this distinct and special skill that can change your own religious life and benefit your community at the same time.

Jewish Louisville finally has an action plan for moving the worship community – and perhaps the community as a whole – forward. Rosov Consulting, the California-based firm that was retained about a year ago to do a synagogue sustainability study, …