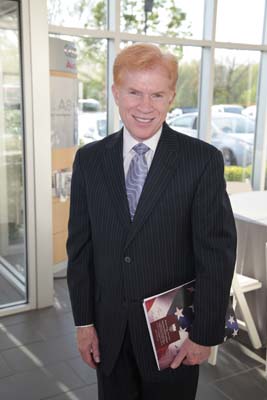 Blue Grass Motorsport Audi hosted and sponsored the first event of the Uniquely Jewish Event Series on Tuesday evening, April 23, and the Audi showroom on Bowling Boulevard was a wonderful location for Dr. Gary Zola’s presentation on Jewish Mobility: Planes, Trains and Automobiles.

Nearly 35 people showed up for this 2013 Federation Campaign event and were treated to a fast-paced and entertaining presentation on Jewish migration patterns, wonderful hors d’oeuvres, desserts and beverages.

Jewish Community of Louisville President and CEO Stu Silberman welcomed everyone and recognized Ben Vaughan, an active  young adult member of the community who is the chair of the Uniquely Jewish Event Series; Vaughan introduced Dr. Zola, the executive director of the American Jewish Archives at Hebrew Union College in Cincinnati.

Dr. Zola, using amusing anecdotes and colorful illustrations, traced the “wandering Jew” through voluntary and involuntary travels, from Jacob’s family’s trek from Canaan to Egypt 3500 years ago through the present day.

The diaspora began, Dr. Zola said, when the defeated Jewish community was carried into exile in Babylon and, after a generation and a half, when the Persian Emperor Cyrus issued the Edict of Restoration in 538 that allowed the Jews to return to Jerusalem, not all of them chose to return. In fact their migration continued eastward to China and India.

With the destruction of the second Temple in the year 70, the Jews were again forced into exile, and Dr. Zola traced their spread throughout the Roman Empire – through North Africa, Asia Minor and Germany. By 600, they had arrived in Spain where they thrived until 1492, when they were forced by the Inquisition to convert or leave.

From Spain, Jews settled wherever they were allowed to live and work. Dr. Zola said one of the key places was the Netherlands, which had thrown off the Catholic Church and the Spanish empire in favor of business pursuits. As the Dutch built their empire, including Aruba, Bonaire and Curacao in the Caribbean, Jews were among the settlers in these colonies. The Dutch went on to capture Brazil from the Portuguese and the Jews settled there, too. But when the Portuguese recaptured the land, they brought the Inquisition with them, sending the Jewish settlers fleeing to New Amsterdam.

These Jews were the first in the wave of Sephardic Jews who settled in North America. They established the first Jewish communities in Newport, RI; Savannah, GA; Charleston, SC; New York and Philadelphia.

The second wave of Jewish immigration was Germanic. They didn’t stay on the East Coast, but chose to settle in New Orleans, the Midwest and the West Coast. The Louisville, Indianapolis and Cincinnati Jewish communities’ roots can be traced to the German immigration.

Dr. Zola highlighted two Louisvillians in his talk – Isaac Bernheim, who worked his way from New York to Paducah as a peddler before amassing the resources to establish himself near Louisville as a distiller; and Lewis Naftali Dembitz, Louis Brandeis’ uncle, who was one of the first Republicans and was the one who nominated Abraham Lincoln for president.

Lincoln’s ties to Louisville’s Jewish community were so strong that he was sometimes referred to here as Rabbi Abraham, Dr. Zola said.

Dr. Zola quickly skipped ahead and wrapped up his talk with a brief mention of the third wave of Jewish immigration from Eastern Europe.

When Dr. Zola talked about the Jews’ arrival in New Amsterdam, he said Peter Stuyvesant was instructed by the Dutch West India Company to let the Jews settle there; he noted that one of the conditions required of the Jews is that they would take care of their own so the poor would not become a burden on the state.

He observed that that is what we continue to do today through the Federation Campaign. When he finished answering questions, 2013 Federation Campaign Chair Karen Abrams brought the event to a conclusion by encouraging people to make their pledges to the Campaign or to increase them to enable the community to continue to help Jews in need in our Partnership 2Gether region in the Western Galilee and here in Louisville.