In 1996, David Irving filed suit in England against Deborah Lipstadt and her publisher, Penguin Books, charging that she libeled him in her book Denying the Holocaust, because she characterized some of his writings and public statements as Holocaust denial. Using the justification defense, Dr. Lipstadt, Penguin and their defense team demonstrated that what she wrote about Irving was substantially true and therefore not libelous. 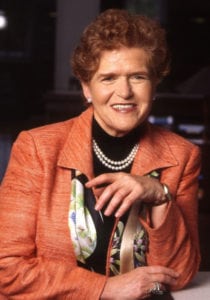 The case reverberated around the world and Dr. Lipstadt, the Dorot Professor of Modern Jewish History and Holocaust Studies at Emory University, was lauded for shining light on the Holocaust denial movement.

Keneseth Israel is bringing Dr. Lipstadt to Louisville on Thursday, November 10. At 6 p.m., KI will host a VIP meet and greet for the distinguished professor, and at 7, Dr. Lipstadt will speak at an open community event about her book, History on Trial: My Day in Court with a Holocaust Denier, and the new movie, Denial, that is based on the book.

The community event is free. The cost of the meet and greet is $54 per person, and will include a signed copy of History on Trial. Proceeds from the meet and greet will go to the Ilse Meyer and Ernie Marx Education Fund, which supports a biannual trip for local teachers to visit the U.S. Holocaust Museum and helps them bring Holocaust education to life in the classroom. The value of the book is $18 and is not tax-deductible. RSVP by Monday, November 7, at www.jewishlouisville.org/lipstadt or contact Yonatan Yussman at 502-459-2780.

In addition, there will be a private screening of Denial at the Baxter Avenue Theatres on Sunday, October 30, at 10 a.m. Tickets, which will be available at the door, are $5 per person and seating limited.

“To me, this is personal,” said Keneseth Israel President Scott Weinberg. “I was in her class at the time she was served with the papers, so I distinctly remember her talking about receiving the papers when I was in class with her.”

Throughout the ordeal, she showed resilience and determination. “If it weren’t such a compelling story,” he added, “it wouldn’t have been made into the major motion picture.

“It is particularly relevant today,” he continued, “when we have people on both sides of the political aisle who confuse fact with opinion. You can have opinions, but can’t treat opinions as fact.”

Lipstadt is a preeminent Holocaust educator. At Emory she created the Institute for Jewish Studies and was its first director from 1998-2008. She directs the website known as HDOT [Holocaust Denial on Trial] which, in addition to cataloging legal and evidentiary materials from David Irving v. Penguin Books and Deborah Lipstadt, contains answers to frequent claims made by deniers.

Her three other books are The Eichman Trial, Denying the Holocaust: The Growing Assault on Truth and Memory, and Beyond Belief: The America Press and the Coming of the Holocaust. She is frequently called upon by the media to comment on a variety of matters.

The Jewish Council for Public Affairs awarded her its highest honor, the Albert D. Chernin Award given to “an American Jew whose work best exemplifies the social justice imperatives of Judaism, Jewish history and the protection of the Bill of Rights, particularly the First Amendment.” Previous winners included Justice Ruth Bader Ginsburg and Professor Alan Dershowitz. She has received many other accolades, too.

“Wherever she goes,” Weinberg added, “her talks draw capacity crowds. We are lucky to have her in our community, particularly so close to the release of her movie.

“At Emory,” Weinberg said, “her classes at Emory were always full. I had a small seminar with her of about eight students, and we studied the Holocaust and the American media.”

“Everyone who attends this event will come away with great admiration for Dr. Lipstadt as a person, for what she went through and for what she’s done for the Jewish community.”

Women of Reform Judaism’s Central District will hold a biennial gathering of women in Louisville November 3-6 with the theme “WRJ Central Rocks the Boat.” Those attending will discuss pressing challenges facing the Jewish community in the 21st Century and …

Our shared history and shared future is the core strength and connection of our Jewish community. How we care for, celebrate and engage today will impact the future. As we begin the new year 5777, there will be significant new …