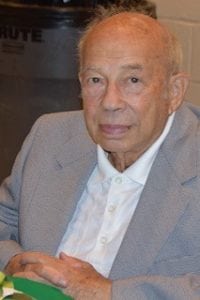 David Kling, a founding member of Temple Shalom and a lifelong Louisville Jewish activist, died Wednesday, December 20, 2017, at Baptist Health.
Born December 11, 1922, to the late Arthur and Selma Marcus Kling, David served in the Army Corp of Engineers during World War II and received his bachelor’s degree in engineering from the Speed School of Engineering at the University of Louisville. He became a co-owner of the Kling Company
Jewishly active, Kling served as president of Temple Shalom and was a member Men’s Club. A skilled wood worker, he built most of the furnishings on the bima of the synagogue, including the ark doors.
He also was president of the Jewish Family & Career Services and of the JCC, where he also was a life member.
Kling loved to fly. He was a private pilot, a captain with the Civil Air Patrol and was a member of KIPKUG.
He also taught scuba diving at the JCC and was passionate about photography in addition to woodworking.
He was a Scout Master with Troop #30 and served on the Old Kentucky Home Council.
In addition to his parents, Kling was preceded in death by his son, Allan Ben Kling.
He is survived by his loving wife of 70 years, Margot Preis Kling; his daughter, Ruth “Cookie” Honigberg; two granddaughters, Cari Hatch (Robert) and Shana Honigberg; and two great-grandchildren, Chloe and Cooper.
Funeral services will be held Friday, December 22, noon, at Herman Meyer & Son, Inc., 1338 Ellison Ave. Burial followed in Keneseth Israel Cemetery, Temple Shalom Section. Expressions of sympathy may be made to Temple Shalom or the JCC.