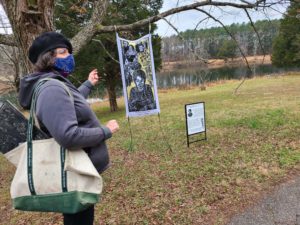 Gabriella Boros, the 2020 Bernheim artist-in-residence, points to a fabric print of ACLU-KY leader Suzy Post. The print is part of the FEMMEnomenal Bluegrass Botanicals project at the forest, which honors Kentucky women of note and also pairs each with a plant that best suits them. (Community photo by Lisa Hornung)

An outdoor art installation at Bernheim Arboretum and Research Forest celebrates Kentucky women and native plants – the work of an Israeli American woman, a daughter of Hungarian Holocaust survivors.
Gabriella Boros, the 2020 artist-in-residence at Bernheim, created the pieces: 10 banners printed from hand-carved woodcuts, which became the FEMMEnomenal Bluegrass Botanicals project.
Each banner shows an image of a Kentucky woman of note, paired with a native Kentucky plant that Boros felt best represented the woman and her accomplishments.
Boros first applied to the artist-in-residence program for 2019, but when Arts in Nature Curator Jenny Zeller saw her application, she felt it would fit better in 2020 – the 40th anniversary of the program and the centennial of the 19th Amendment, which guaranteed women the right to vote.
“I felt like it would be an opportunity to elevate the project far beyond what we would normally be able to do in a regular residency year,” Zeller said.
Jewish women featured include Florence Brandeis, one of the first women gynecologists and pediatricians in Kentucky; Suzy Post, ACLU activist; and Amanda Uri Bernheim, wife of Isaac Bernheim. The rest come from different races – an important factor in Boros’ selections.
Judaism was another important theme in the choice of artists and in honoring the legacy of Isaac Wolfe Bernheim.
“He has one of those rags-to-riches stories, which is the American dream,” said Bernheim Executive Director Mark Wourms.
Boros has not lived at the Bernheim during her residency because of the COVID-19 pandemic, but she has made trips to the area. 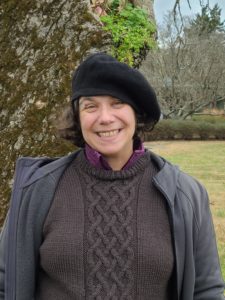 Her work required extensive research into the women’s lives – how they dressed, the tools they used – most of which she did from her home in Skokie, Illinois.
Boros made three to six drawings of each piece on tracing paper, choosing the one she liked best. Because the images would be transferred onto wood surfaces, she had to draw them in reverse. Using transfer paper to set the images onto an expensive plywood she ordered from Japan, she then carved the images, rolled black ink over the surfaces, then printed on the fabric.
“It was something really different,” Zeller said. “It was very forward-thinking. I just love how the work draws on the parallels of historical women and the beauty and resilience of nature.”
Boros and Bernheim officials all had different women in mind for the project, so they came together to choose the subjects. For Boros, she had to be impressed by a subject she was honoring to include her.
By the time the project was finished, though, she felt a special connection to some of them.
“I definitely have my favorites,” she said. “There’s some that I really admire and feel like, ‘Wow! You know, that’s a life well lived.’”
The daughter of Hungarian immigrants, Boros was born in Israel but moved to Cleveland as a child when her father, an immunologist, couldn’t find work back home. After another move to Detroit, Boros attended college at the University of Rochester, planning to become a doctor.
“But I came home, and I had a D- in physics, and a C- in calculus,” she recalled. “My dad was like, ‘Honey, no way are you going to get into medical school. I’m sorry.’”
But after seeing her A+ in art and art history, he told her that was the field where she belonged. She eventually graduated from the University of Michigan School of Art.
She focused on painting until nine years ago, when she discovered printmaking in Florence, Italy.
“It was just one of those brain-rattling experiences,” she said. Being intimate with wood is just my thing. I love it out here [in nature], and I love it in the studio.”
In 2016, she was chosen to participate in the year-long Midwest Jewish Artists Lab at the Spertus Institute in Chicago. Her culminating 10 prints, based on the prophecies of Isaiah, were shown at the Spertus Museum.
Two of her prints also have hung at the International Court in Luxembourg, and a feminist piece called “Little Red” was shown in Croatia. Her work also has been shown in Jerusalem, Evanston, Illinois; Brooklyn and Ann Arbor, Michigan.
During her Bernheim residency, Boros has made several connections, most notably with Tom Block, the great-grandson of Isaac Bernheim, who broadened the artist’s knowledge about his family.
The banners are expected to be displayed for as long as they hold up outdoors.
Zeller said she experimented with several types of fabric before settling on a polyester ripstop fabric. Meant for outdoor use, the material is used in making tents and flags.
Bernheim volunteers hung the banners on trees along the lake. So far, they have weathered the elements.
Wourms is pleased with the reception to the prints. Lake Nevin Trail attracts many regular walkers, several of whom tell him how much they enjoy the images and appreciate the women they depict.
“[They] come up to me and say, ‘What a beautiful addition! I have been reading one of these a day, and it makes me think about them every day.’” Wourms said. “I mean, that’s pretty strong.”

Want to go?
The Bernheim remains open during the pandemic, with masks and social distancing observed. Visit bernheim.org for details. Boros made four copies of each banner, and the Filson has bought an entire set. Others will travel around Kentucky, funded by an Art in Activism grant from the Kentucky Foundation for Women. Individual prints are available for purchase for $1,500 each. A portion of each sale will support the Arts in Nature program when purchased through Bernheim.

Guest Columnist Abby Glogower Everyone is familiar with the curse “May you live in interesting times,” and 2020 has certainly been the most interesting year in recent memory. There can be no question that we are living through historic events: …