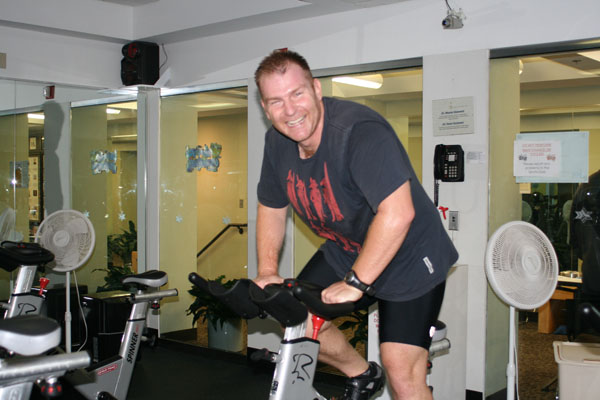 The JCC of Louisville raised more than $700 for the Special Olympics and the JCC during the first Cycle for Good. The event’s success is thanks mainly to Tara Stone, who cycled for 4 hours and 45 minutes in a row!

“I started spinning more than 10 years ago. I wanted to ride for the whole event to show our members how far they can push themselves if they want to,” said Stone.

In addition to raising money, the building was decorated with informational factoids about Special Olympics and the athletes they help.

Louisville’s efforts were part of a national effort started by the Jewish Community Centers Association. In Louisville, 19 participants paid or were sponsored for $25 an hour on the bike. Plans are in the works to duplicate the event next year.

When Janet Hodes, Alison Silberman and Jennifer Tuvlin, co-chairs of the Lion of Judah and Pomegranate Event for the 2013 Federation Campaign, heard that Rochelle Shoretz was confirmed as the speaker for the January 24 program, they were very excited. …

[by Maggie Rosen and Ben Koby] BBYO On Saturday, December 1, the freshman girls of Jay Levine BBG (formally known as Members-in-Training) were formally inducted into Jay Levine BBG and are now officially members. The induction ceremony was held at …

[by Shiela Steinman Wallace] The fact that former U.S. Supreme Court Justice Louis D. Brandeis was a native son of Louisville and its Jewish community has always been a source of pride. His memory is honored at the University of …