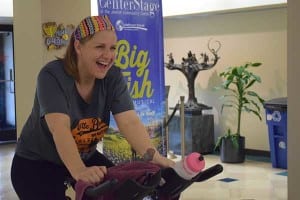 After riding a stationary bike in the JCC lobby for four hours straight at the Cycle for Good fundraiser for Special Olympics Kentucky on Sunday, December 13, JCC Healthy Living and Member Experience Director Tara Stone stepped off the bike gingerly and steadied herself before digging into a small stack of fresh, hot, well-deserved latkes.

Her pedaling persistence paid off. Stone’s long ride raised more than $200 in donations for Special Olympics Kentucky. A total of $700 was raised at the event.

Tired, yet surprisingly un-sweaty, due to her special perspiration-absorbing headband and t-shirt, Stone said she felt great about raising awareness and cash for such a worthy cause.

Four hour-long spinning classes were held from 9 a.m. to 1 p.m. and participants donated $25 per hour to “rent” a bike.
Non-cycling gym-goers who came to the JCC on the day of the event also made donations.

Hailey Zortman, 12, and Aiden Hester, 12, both members of the Louisville Royals Special Olympics team, took part in the final cycling class of the fundraiser, which was led by Jenn Hay.

Hay kicked off the class with some stretches and interval training. Zortman, Hester and the rest of the cyclists alternated between several seconds of slow and fast-paced pedaling.

Zortman and Hester’s moms, Ashley Zortman and Michelle Hester, said neither one of the kids can ride a standard bicycle, so Cycle for Good is a great opportunity for them to experience what bike riding feels like.

Louisville Royals Coach Cathy Derringer came to encourage her athletes, and also did some cycling for good. She said she was lured by the oldies, like Simon and Garfunkel’s “Cecilia,” that were played during the 11 a.m. session.

Cycle for Good is a nationwide JCC event, and each individual JCC chooses a charity to benefit.

Derringer said she and her athletes are very grateful that the JCC selected Special Olympics.

“We love it,” she said. “These kids always want to try something new.”

Just as we are poised to celebrate the beginning of a secular New Year filled with new possibilities and new opportunities, we will begin to once again visit the next book in our Torah cycle, the book of Exodus, Sefer …

At the packed, buzzing opening reception for the juried Annual Mazin Art Exhibit in the Patio Gallery on Sunday, November 22, many people paused and pondered in front of the first prize-winning piece, “Fusion.” The enigmatic earth-toned multimedia work shows four conical …

Every year the Ida and Bernard Behr Holocaust Memorial Education Fund sponsors a free trip to the United States Holocaust Memorial Museum. Participants attend pre- and post-trip sessions to prepare for and debrief from their experience. This year the trip …