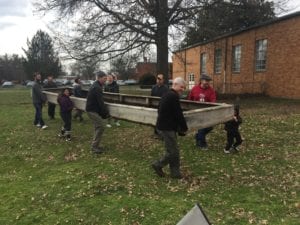 Volunteers from across the community, including several from the religious
schools, helped move the Community Garden in February to its new home on the
grounds of Anshei Sfard. (photos by Alayna Altman)

One Sunday morning in February, shortly after Tu B’Shevat, Alayna Altman, accompanied by dozens of students from LBSY and The Temple, and parents and volunteers from the Muhammad Ali Center, began moving the Community Garden from the back of The J campus, site of the future JCC, to its new home on the grounds of Anshei Sfard.
They lifted the raised garden beds, walked them across the parking lot and carefully set them down on their new locations.
Discarded benches were rescued from the construction bays and set up around the garden, along with new seating made from reclaimed wood and colorful signs made by kids.
Fences and compost bins, also made from made with lumber from flipped houses, were erected around the site.
And bricks, donated by Altman’s parents, were assembled to create the structure of a terraced herb spiral garden, which will enable the growing of plants that require different levels of sun and drainage.
“In one structure, you’re able to create different climate zones,” Altman said.
It was a good day’s work, but it won’t be completed until the threat from the coronavirus subsides.
With the onset of the global pandemic, The J has temporarily closed. Activities from all departments are migrating online. 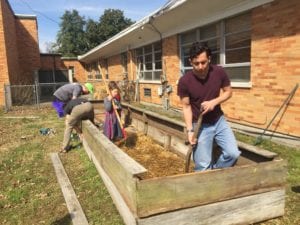 The Community Garden is no exception.
“The coronavirus affects everything,” said Altman, director of JOFEE (Jewish Outdoor, Food, Farming & Environmental), “from the amount of volunteers I can engage, to the capacity of what we can grow.”
It will also curtail all the activities she had planned to hold in the garden once it was moved, constructed and planted.
The Guidance for Growers gardening class, which she had planned to hold with an experienced farmer, is postponed until further notice. There is, however, an e-course that will be available for students.
Altman is limiting garden volunteers to two to three at a time – not 10 – since they are sharing tools.
“I am hoping we can see this pandemic as an opportunity to stay safe, reset and embrace gradual improvements, Altman said. “The garden may not be what I previously hoped, but we’re still moving in the right direction.”
Meanwhile, Altman still has big plans for the garden, which she sees as something far more than a space that produces food. 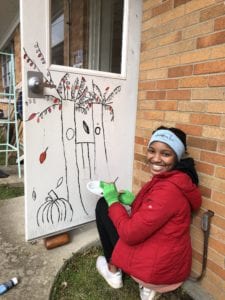 “I guess I’m hoping to create a space that is dynamic in its function, that has more feeling of exploration as part of its design, and that can be used for events and education – along with growing food.”
With the help of a $3,000 grant from Whole Foods, Altman plans to develop a garden that is part experimental (the herbal spiral), part handicapped accessible (one of the raised beds is double-stacked, enabling older and handicapped gardeners to sit on it), educational (Guidance for Growers and cooking classes inside the Anshei Sfard building, using produce from the plots) and just plain welcoming.
“I want it to feel inviting, that you come and sit there, and get out your sketch book and draw some plants growing.”
Being next to the Anshei Sfard building is an opportunity, Altman said. Not only does she plan to erect rain barrels to collect water from the roof (one is already up), but she plans to feed on the enthusiasm of J campers, who will meet there this summer.
“Campers will see this all the time,” she said. “Camp and JOFEE, in some ways, are spatially consolidating in this one spot; there’s going to be a lot more foot traffic going through this garden.”
The garden also reflects JOFEE’s efforts to recycle. The amount of reclaimed it and other JOFEE activities have used since Sukkot totals more than 1,000 board feet.
Altman hopes to get campers and religious school students involved in the camp through classes and art projects. She suggested they could make multilingual signs in English, Hebrew and possibly Arabic – akin to signage found in Israel.
“It would be a great opportunity for the Hebrew School kids to practice their Hebrew,” she said.
Mostly, she hopes the garden, and its related classes and activities, will encourage people to start gardens at home.
“There are many different ways to garden; there’s no right way to do it,” Altman said. “You can do it with raised beds; you can do it directly on the lawn; you can do it in pots and containers. There are many different ways to learn to grow. It’s about finding the way that’s exciting to you.”