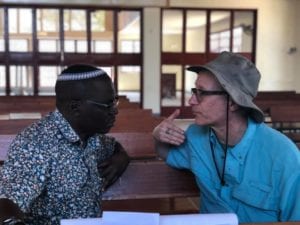 Cantor David Lipp speaks to Rabbi Gershom Sizomu of the Abayudaya following a Torah dedication in the Stein Synagogue of Nabugoya. (photos by Cantor Jesse Holzer)

Uganda? You’re going to Uganda? On Safari? To see the gorillas?
No, not to see the animals. A mission to the Jewish community.
There are Jews in Uganda? Are they like the Ethiopians?
Yes and no.
Let me tell you a story.
In the 1890s, Christian missionaries converted many Ugandans. One convert, Semei Kakungulu, warrior, statesman and tribal leader, became disillusioned with western imperialism and the Christian parts of the Bible. It is said that he tore out those pages and studied and meditated on what remained – what we think of as the Hebrew Bible. He guided his followers to observe the laws of Moses and an organic Judaism was born.
They called themselves The Abayudaya, which is Luganda for The Jewish People. They shaped for themselves a religious life based on their reading of the Bible, following the laws given to Moses and his people. They sacrificed and roasted the Pascal lamb on Passover, as Torah commands. Eventually, they gave music to biblical prayers – the Shema, the Psalms. Post-biblical teachings had not reached them, including most of the prayers in the prayer book.
In time, the Abayudaya discovered there were other Jews in the world who had a rich history and traditional practices that had developed since the writing of the Bible. In the 1960s, when Uganda became independent, Israel opened its first embassy there and the Abayudaya met modern Judaism. Ancient practices were replaced with those we know and cherish – the Passover seder, prayers and western music to accompany them.
In the 1970s, under dictator Idi Amin, Judaism was illegal; the Abayudaya suffered in number and spirit. But they rebuilt after Amin’s fall with the leadership of young men such as Rabbi Gershom Sizomu (who merits a story of his own). Their distinctly African musical expression has lifted familiar prayers into new dimensions, even as they’ve adopted western sounds as well. 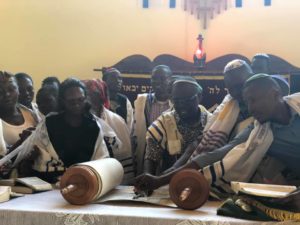 Members of the Abayudaya take part in the Torah service during the scroll’s dedication.

In the early 2000s, a group of Conservative rabbis accepted the Abayudaya into the Jewish world through a mass mikvah immersion. The community believed this was a mere formality since they had been living as Jews for 80 years, circumcising their sons, observing Kashrut and the Sabbath.
So why a mission now?
Members of the Cantors Assembly (CA) were called to action last October when a member of the Abayudaya, Assiimwe Rabbin, was denied a visa to study at a Conservative yeshiva in Israel; the Israeli Rabbinate did not consider his community Jewish.
Responding to Rabbin’s visa rejection, nine cantors and two spouses (a musicologist and a lawyer) embarked on a solidarity mission in February. We had weekly Zoom meetings, comparing vaccinations, visas, drivers, hotels, flights and packing lists.
We formed three working groups: recording, interviewing and education.
Mike Stein (Los Angeles) had visited the community many times and arranged studio time to record current musical practice and add instrumentation. He and Jeremy Stein of Milwaukee, a flautist, continued to the Kenyan Jewish community to make more music after the rest returned to the U.S. The recordings will likely form a Hagadah supplement. 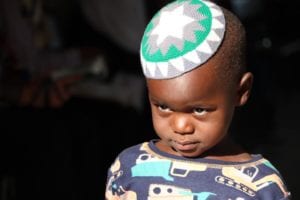 Mike Weis (New York), the CA’s director of communications, worked with Jesse Holzer (Florida) and master interviewer Steve Stoehr (Chicago) to record conversations with Rabbi Gershom, community leaders, Rabbin and Gershom’s brother, J.J., who recently opposed the Conservative community he helped create, advocating Orthodox affiliation. (The issue may be less religious and more a challenge to his brother’s leadership and management style).
One of the interesting tensions in our meetings with the Abayudaya was who gets to learn from whom. The community is still in the process of becoming one with world Jewry. They want to learn our music, our traditions, our liturgy. For our part, we want to absorb their exotic colors, rhythms and stories to strengthen and inspire our own sometimes ennui-laden Judaism. Rabbi Gershom would ask us to lead services and we would counter that we flew thousands of miles to hear him!
At our best, we did both. The two days of Rosh Hodesh, the New Month, offered a perfect opportunity.
On the first day, they did the prayer-leading. We were surprised that the weekday liturgical music was western-derived, not African in sound.
On the second day, the visiting cantors led services, introducing new sounds to the community. Afterwards, each of us taught for five minutes whatever we wanted a group of budding prayer-leaders to know: when to take tefillin off on Rosh Hodesh, Pirkei Avot, kavvanah (proper intent and concentration) in prayer. For the first time in cantorial history, we ended ahead of time.
Many of us also visited five of the eight Abayudaya communities, most of which were not far from the city of Mbale, the center of Ugandan Jewish life, in the southeastern part of the country. We also toured NGOs that dug aquifers so that clean water that could be delivered to rural communities in ways that didn’t allow for the accumulation of standing water. 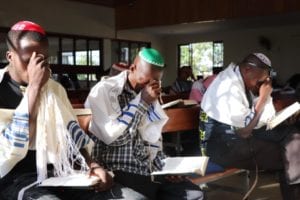 Three Abayudaya men at prayer during the Torah dedication.

In the process, we learned that most Ugandans have no employment at all and that they depend greatly on outside funds. So the CA made the largest single order of kippot and challah covers – each hand-made – in the history of the community.
We were especially gratified to learn during our stay that Rabbin, whose rejection had compelled our mission, received his Israeli visa and left for yeshiva in Jerusalem while we were there.
Our mission came away with a profound respect for their endurance. We were in awe of their piety and faith, had an appetite for the joy and authentic expression that pours through their music. The experience renewed our hope that Judaism can foster diverse expressions of religious passion and practice.
Most importantly, we chose to learn from our brothers and sisters of the Abayudaya, committing ourselves to their success, material and spiritual, to be there for them in any way we can.
The work has just begun.

(Cantor David Lipp, of Adath Jeshurun, is the incoming president of the Cantors Assembly.)