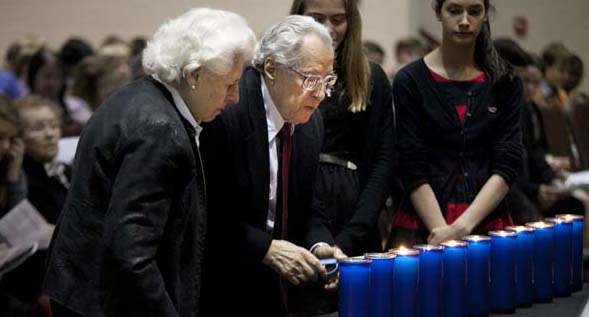 Community honors Righteous Among the Nations

This year’s very moving community Yom HaShoah commemoration took place on Thursday, April 11, at Bellarmine University. The theme, Righteous Among the Nations, honored those who were not Jewish, but courageously stepped forward to help their Jewish brethren during the Holocaust. People of all ages took part in the program, which included the traditional candle lighting ceremony in which Holocaust survivors, their family members, teachers and students from St. Francis of Assisi School played the dominant role.

Rabbi David Ariel-Joel offered an opening blessing that set the tone for this year’s program, which began: Source of peace, ruler of peace, bring an end to hatred and jealously – bring only shalom between us and others – give us shalom.

Mayor Greg Fischer interjected an optimistic viewpoint gained from watching good people rally around to help others in trying times. “Times like this,” he said, “make us ask why bad things happen and what we can do to help make things better. In Connecticut and other places and in the darkness and despair of the Holocaust, we said such tragedy was bigger than we are and we banded together to do good.” He considered the large interfaith audience one of “many religions with one heart.”

Fred Whittaker, a Holocaust educator at St. Francis of Assisi and chair of the 2013 Holocaust Commemoration Committee, expressed gratitude to all who came to “transform, recollect and memorialize the past in an alchemy of love. We came here to recollect insights from six million lost lives and hope our actions will help to defy the erosion of memory from the past.”

He noted that Yad Vashem, Israel’s Holocaust memorial, has recognized more than 24,811 non-Jews whose efforts saved many Jewish lives during the Shoah. He also lamented the hundreds of millions in Europe who stood by and did nothing. “It remains on us,” he concluded, “to listen and to be able to tell these stories to our children and their children.”

Dr. James Holladay honored the memory of Father Stanley Schmidt, whom he considered “a pioneer in recognizing conciliation and justice.” When Pope John the XXIII opened the church to multiple religions, Dr. Schmidt began the Office of Humanism. He had a greater vision of a dialog between all sects and felt Jews should also be included in working toward justice and peace on important matters in our community. “He felt the best way to understand was not with words, but with doing things,” said Holladay. “Through his works, we are a better community.”

Cantor Sharon Hordes strummed the guitar as she sang a plaintive song in German, A Jewish Child, about a mother warning her child to hide his faith lest he be found to be a Jew.

Holocaust survivor Fred Gross offered A Reflection on the Righteous among the Nations, “those who rose to save the Jews among them and risked their lives to save others. They were the rescuers,” he said. “Let us be grateful to the few who refused to stand by and do nothing.”

Guest speaker David Lee Preston, assistant city editor of the Philadelphia Daily News, provided the incredible real-life story about his mother, Halina Wind, who survived the Holocaust by literally going underground into the sewer systems during the time the Germans liquidated the Jewish community of Lvov, Ukraine. For 14 months, she and 20 others endured horrific conditions; 10 survived thanks to the help of three sympathetic Christian sewer workers who risked their lives and their families’ lives to shelter and feed her group. She was distressed that such sources of support were far too few.

As a way to honor these brave and selfless heroes, Halina Wind Preston helped to erect the country’s first garden dedicated to righteous gentiles in Wilmington, DE, in 1981, a year before her death. More than 300 people showed up for the ceremony. “I owe my very existence,” said Preston, “to these courageous people who helped my mother to live.” Her story was told in an Academy Award nominated film, In Darkness.

“We still haven’t learned the lessons of the Shoah since genocide is still going on in the world,” Preston continued.

He figures there were a total of 25,000 rescuers from some 45 countries. Trees in a garden in Evanston, IL, honor 38 of those who set examples that encourage others to live righteous lives. He asked those interested in honoring those heroes (there are perhaps 400 still living) to make a donation to the Jewish Foundation for the Righteous (jfr.org).

JCPA Plenum focuses on social justice [by Shiela Steinman Wallace] Each year, the Jewish Council for Public Affairs convenes its Plenum in Washington, D.C., at which delegates from across the country learn about pressing social issues, engage in discussion and …

Anshei Sfard shrinks, considers its future From time to time, rumors spread through the Louisville community. While they may be based on some facts, they often contain erroneous information. In recent weeks, numerous rumors have been circulating regarding Congregation …