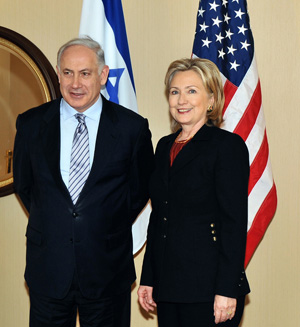 Guess which speech got the bigger cheers.

To be sure, in speeches this week at the annual AIPAC policy conference, all sides repeatedly stressed complete confidence in the durability and necessity of a strong U.S.-Israeli relationship, and highlighted areas of agreement, first and foremost the need for tough action to block Iran from acquiring nuclear weapons.

Several key differences were on display, however, as the Israeli prime minister, the U.S. secretary of state and the leaders of the American Israel Public Affairs Committee did not back down from their bottom lines.

AIPAC officials insisted that disagreements between Jerusalem and Washington take place behind closed doors. Clinton said the Obama administration will make its unhappiness clear and public when it regards an Israeli action as undermining the peace process.

For Netanyahu and AIPAC, Jerusalem is off the table; for Clinton it’s very much part of the discussion.

Clinton went out of her way to praise the Palestinian Authority; Netanyahu went of his way to criticize it.

The two speeches Monday — Clinton for breakfast and Netanyahu for dinner — culminated two weeks of tensions sparked when Israel announced a major housing start in eastern Jerusalem during a visit to Israel by U.S. Vice President Joe Biden that had been aimed at underscoring the close U.S.-Israel friendship and restarting Israeli-Palestinian peace talks.

“It is our devotion to this outcome — two states for two peoples, secure and at peace — that led us to condemn the announcement of plans for new construction in East Jerusalem,” Clinton said. “This was not about wounded pride. Nor is it a judgment on the final status of Jerusalem, which is an issue to be settled at the negotiating table. This is about getting to the table, creating and protecting an atmosphere of trust around it, and staying there until the job is finally done.”

Clinton’s mild rebuke brought surprising, if light, applause. It was a mark of the success of repeated pleas from AIPAC’s leadership to more than 7,500 activists in attendance to keep things civil. Clinton earned standing ovations coming in and out, and there was no audible booing.

Netanyahu’s Jerusalem encomium, by contrast, brought the house down — delivering perhaps the biggest cheers during this year’s conference.

Netanyahu’s message in meetings with U.S. leaders, his spokesmen said, was that the dispute over Jerusalem could delay peace talks by a year.

“Jerusalem is not a settlement,” Kohr said in the line of the morning that brought the greatest cheering. “Jerusalem is the capital of Israel.”

Kohr also made the case for keeping such disputes out of public view.

“When disagreements inevitably arise, they must be resolved privately as is befitting close allies,” he said.

That’s been the mantra of AIPAC, along with the center and right in the pro-Israel community — and Clinton turned it around.

The announcement of new construction in the West Bank and eastern Jerusalem, she said, “exposes daylight between Israel and the United States that others in the region hope to exploit. And it undermines America’s unique ability to play a role — an essential role, I might add — in the peace process. Our credibility in this process depends in part on our willingness to praise both sides when they are courageous, and when we don’t agree to say so, and say so unequivocally.”

It was clear, though, that Clinton was sensitive to Israeli and pro-Israel complaints that the opprobrium she had heaped onto Israel — she called the building announcement an “insult” — was one-sided and that she had ignored Palestinian violations.

In fact, her spokesmen have condemned Palestinian incitement. And Monday, Clinton picked up the two signal issues that have exercised Israel’s advocates: the naming of a public square in Ramallah for a terrorist who led a deadly 1978 attack, and Palestinian rioting greeting the rededication of an Old City synagogue destroyed during the 1948 Independence War.

“These provocations are wrong and must be condemned for needlessly inflaming tensions and imperiling prospects for a comprehensive peace,” Clinton said to applause.

Clinton leavened her calls for an end to incitement by attempting to shift blame for the naming of the square from the Fatah-controlled Palestinian Authority to Hamas. And she had praise for the PA leadership.

“We commend the government of President Abbas and Prime Minister Fayyad for the reforms they’ve undertaken to strengthen law and order, and the progress that they’ve made in improving the quality of life in the West Bank,” she said.

Netanyahu had only criticism.

“What has the Palestinian Authority done for peace?” he asked. “They have placed preconditions on peace talks, waged a relentless international campaign to undermine Israel’s legitimacy, and promoted the notorious Goldstone report that falsely accuses Israel of war crimes.”

AIPAC, Israel and the Obama administration have differences on Iran as well. AIPAC activists will push hard for enhanced Iran sanctions when they lobby Tuesday afternoon on Capitol Hill, while the administration wants time to exhaust the prospect of multilateral sanctions.

Here, though, Clinton was able to throw the crowd some meat, saying that whatever sanctions emerged, they would not be glancing.

“Our aim is not incremental sanctions but sanctions that will bite,” she said. “It is taking time to produce these sanctions, and we believe that time is a worthwhile investment for winning the broadest possible support for our efforts. But we will not compromise our commitment to preventing Iran from acquiring these nuclear weapons.”

Rosenberg, just inaugurated as AIPAC’s president and a key fund-raiser in candidate Barack Obama’s presidential run, also made sure to hit affectionate notes, noting Clinton’s pronounced pro-Israel record in her eight years as a U.S. senator from New York. Among other things, she led the successful effort to force the International Committee of the Red Cross to recognize Israel’s Magen David Adom.

Netanyahu made sure to praise Obama for increasing security cooperation.

“From one president to the next, from one Congress to the next, America’s commitment to Israel’s security has been unwavering,” he said. “In the last year, President Obama and the U.S. Congress have given meaning to that commitment by providing Israel with military assistance, by enabling joint military exercises and by working on joint missile defense.”

Kohr, the longtime AIPAC director, used the policy conference to outline the group’s priorities. He focused on gaining Israel its deserved entry into the international community through membership in the Organization for Economic Cooperation and Development, which coordinates economic policy in the developed world; getting Israel a seat on the U.N. Security Council; and forging a closer relationship between Israel and NATO, the North Atlantic Treaty Organization.

All have been Israeli priorities for years, but throughout the Bush administration and the prevalence of neoconservatism in its foreign policy, AIPAC’s embrace of these issues was low-grade. In fact, in making the case for advancing Israel in the United Nations, Kohr even asked: “Now, some of you may be asking, why does it matter?”

He ran through an explanation of the U.N. Security Council’s powers, but left unsaid why else it matters: The Obama administration’s emphasis on multilateralism and on working out differences in international forums. Kohr was telling his activists that this was the new Obama order.

Perhaps most telling was where Clinton ad-libbed away from her prepared remarks and revealed a soft affection for Israel and its friends.

She delivered a prepared line about “pioneers who found a desert and made it bloom,” then paused and said, “There were people who were thinking, how could that ever happen? Ahh, but it did.”

She amended a line about warriors offering peace to describe them as “so gallant in battle.” Clinton asked the crowd if they thought she thought it necessary to speak “because AIPAC can get 7,500 people in a convention center? I don’t think so.”

In her lengthiest unscripted passage, Clinton recalled traveling the world during the 1990s, the heyday of Arab-Israeli peace talks, and never hearing anyone mention the conflict outside the confines of the Middle East. These days, she said, its periodic explosions into war is often the first item, however far-flung her travels.

It was a gentle unsettling of the belief that the Israel-U.S. relationship exists in a bubble unaffected by outside realities.

“We cannot escape the impact of mass communications,” Clinton said. “We can only change the facts on the ground.”

[JTA Photo: At AIPAC, Clinton gets friendship, Bibi gets love]