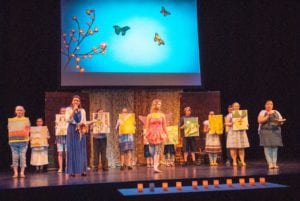 Students of CenterStage/Acting Out display copies of artwork by the children of Theresienstadt during their performance Tuesday, April 25, of “I Never Saw Another Butterfly” at the Yom HaShoah commemoration. Cathy Butler-Weathersby (left) and Marianne Zickuhr joined the production as singers. Approximately 300 people attended this year’s commemoration. (photo by Debby Rose)

Like butterflies, the names of the children filled the air.

It wasn’t just their names, though. It was their drawings, their music, even their dreams.

One said she would eat nothing but white bread when she went home, another would drink hot chocolate in the winter, another would play ball in the courtyard and still another would go to the park and feed the pigeons at night. All when they went home.

Of course, they never went home. These were the Jewish children of Theresienstadt, and instead of home, they went to their deaths at Auschwitz.

But their names, poems, pictures and songs survive. They filled the stage of the Bomhard Theater Tuesday – like butterflies – spoken and displayed by 12 children of The J’s CenterStage/Acting Out program.

These kids performed I Never Saw Another Butterfly, a theatrical project based on the book by the same title, and the theme for this year’s Yom HaShoah commemoration.

“These depictions allow us to see through the eyes of the children what life was like [at Theresienstadt],” said CenterStage Director John Leffert, who has staged the production in schools around Louisville and in far-flung parts of Kentucky such as Flat Gap. 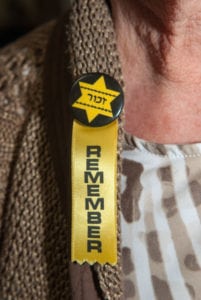 A woman attending this year’s Yom HaShoah commemoration at the Bomhard Theater wore a ribbon on her sweater urging others to remember the victims of the Holocaust. (photo by Debby Rose)

Wherever it’s performed, he said, children have been touched by it, contributing to the Butterfly Project, by coloring paper butterflies – as many as 4,000 to date –which are being hung in the hallway of The J.

This is how the children of Theresienstadt continue to fly.

I Never Saw Another Butterfly, is a collection of children’s drawings and poems from the notorious camp.

“Children were neither just the mute and traumatized witnesses to this war, nor merely its innocent victims,” wrote Nicholas Stargardt, an Oxford University history professor who has studied World War II through the eyes of children.

“The war invaded their imaginations and the war raged inside them.”

More than 12,000 children under the age of 15 passed through Theresienstadt between 1942 and 1944 on their way to Auschwitz. Most would not survive.

The title of the book is based on The Butterfly, a poem by Pavel Friedman, a Czech Jew who was deported to Theresinstadt in 1942. During Tuesday’s performance, the children took turns reading lines from Pavel’s poem.

The commemoration wasn’t all about the children, though.

Eleven candles were lit at the outset to remember the mothers and fathers who died in the Shoah, political activists,
rabbis, teachers, homosexuals, Roma, the mentally ill, those who resisted Nazi aggression, those who sacrificed their own lives so others might live. 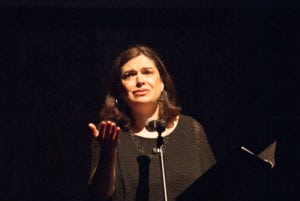 The program opened with a scratchy recording of Es Brent (It’s Burning), a song based on a 1938 Yiddish poem by Mordechai Gebirtig about a pogrom in a Polish shtetl. The song, which became an anthem to Jews living through the horrors, was sung on the recording, in Yiddish, by a survivor named Guta Frank. Cantor Sharon Hordes sang it live in English.

“Guta and her family ran from ghetto to ghetto for four years, trying to keep ahead of the Nazis,” explained Rabbi Beth Jacowitz Chottiner. “Eventually, she and her sister – the only surviving members of her family¬ were imprisoned in a forced labor camp.”

And Holocaust survivor Fred Gross led the Mourners Kaddish, but with a twist. After he spoke each line of the prayer, the assembled responded with the name of a place where victims of genocide were murdered. They started with “Auschwitz … Dachau … Warsaw” and ended with “Bosnia … Rwanda … Darfur.” 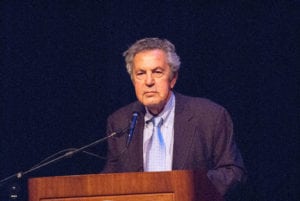 In closing the program, and reflecting on the Kaddish, Rabbi Joe Rooks Rapport wondered aloud, with six million Jews murdered in the Holocaust and millions more in other genocides, “is this truly a time for us to say, Amen?”

“The text is simply the words, and the names, too,” he concluded, “but it is the speaking of them which leads to memory, and in that we may yet find peace.”

Fifty years ago, as Israel celebrated her birthday on May 15, 1967, many feared for her survival. Much of the Arab world was gearing up to destroy the fledgling state, and there was talk of another Holocaust. Miraculously, that is …