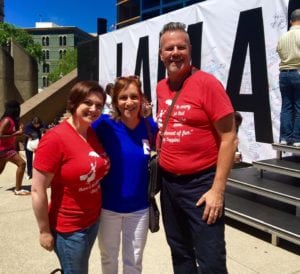 The J’s CenterStage participated in the Muhammad Ali tribute event, I Am Ali, at the Kentucky Center for the Performing Arts on Wednesday, June 9.

In recognition of Muhammad Ali’s lifetime of accomplishments, CenterStage Acting Out theatre, the J’s professional children’s theatre group, provided pages of butterflies for children to color at the event. Butterflies symbolized what Ali stood for and tied in with his famous description of himself when he was a young boxer, “Float like a butterfly, sting like a bee.”

Ali was a man of peace who prompted understanding and tolerance among all people. He had a special love for children and encouraged them to dream and aspire to reach their goals. The boxer’s values parallel those embodied in The J’s mission, so participating in this event was a good fit.

“I am proud our JCC was part of the day and the fact that we were able to engage the community in expressing their emotions through butterflies made it so meaningful on so many levels,” Sara Wagner, The J’s president and CEO, said.

“It’s been inspiring to see the city of Louisville come together to honor Muhammad Ali’s legacy,” she added.

Within sight of the Muhammad Ali Center, children walked booth to booth exploring the different butterfly-themed arts and crafts. Acting Out saved all of the butterflies the children created at their booth and assembled them into one large mural. It’s a way that The J’s Cultural Arts & Ideas Director, John Leffert, said he wanted to help show support for Ali’s dedication to inspiring children to dream.

“To see the diversity of the people in line for tickets…speaks to the incredible charismatic man Ali was. Our city has united in celebration,” Leffert said.

In fact, Acting Out will use butterflies to encourage one of Ali’s messages throughout the 2016/17 season: dream big.

Acting Out will perform I Never Saw Another Butterfly, based on Celeste Raspanti and Hana Volavkova’s book that encourages children in any sort of situation to dream and to reach for their goals.

During the Holocaust, over 15,000 children were sent to the Nazi concentration camp, Terezin, but only about 100 survived. Yet within the camp, they still found inspiration, hope, laughter, flowers and butterflies. The book is a record of their drawings and poems, their dreams and hopes.

For them, the butterflies became a symbol of defiance, making it possible for children to survive and even to dream of a better future.

The J will present three public performances of I Never Saw Another Butterfly within the next year and will also bring the show to schools across the region.

Leffert said children will have the opportunity to color their own butterflies throughout the year in memory of the children killed during the Holocaust.

“We’re going to be hanging the butterflies throughout the entire J building, and on Holocaust Remembrance Day, we’ll remove half of them,” Leffert said. “This will represent the children who died during the horrible events of the Holocaust.”

The I Am Ali event kick started the butterfly project as dozens of children came to the Acting Out booth to color the intricate butterflies while paying tribute to Ali and the children of the Holocaust.

There were many other activities honoring Muhammad Ali’s memory this week. On Sunday, many members of the Jewish community participated in an event at the River Road Mosque organized by the Muslim community and Interfaith Paths to Peace (IPP). More than 150 people turned out to pay tribute to the Champ. Rabbi Gaylia Rooks and Fred Gross were among the speakers. Other speakers included Dr. Muhammad Babar from the mosque, Mayor Greg Fischer, IPP Director Haleh Karimi, Spaulding University President Tori Murden McClure, Christopher 2X and several others.

A group of Israeli teenagers travel all around the United States each year singing beloved songs in Hebrew, Yiddish and English and the Tzofim (Israeli Scouts) will be stopping in Louisville for a free concert on Sunday, July 24, at …

Last month, I left my neighborhood and to some extent, my comfort zone. I headed south on the Gene Snyder to Billtown Road and the Evangel World Prayer Center. I was pleasantly surprised to see both the Israeli flag, flying …