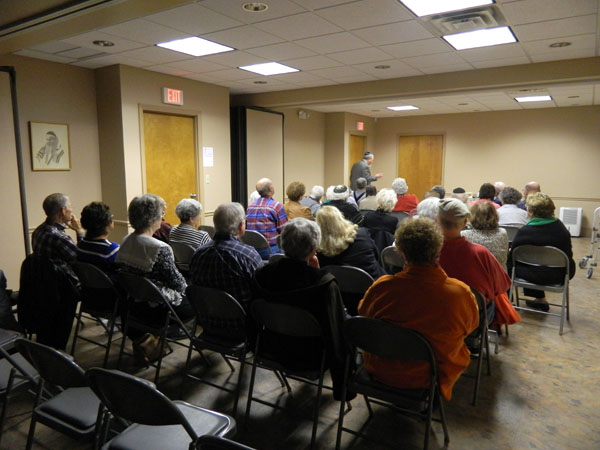 Thursday, December 1, saw one of the best turnouts in recent months for the Chavurat Shalom, when the group met at Temple Shalom.

A healthy and generous luncheon was followed by the showing of the film, The Sons of Liberty, which highlighted the special role that Hyam Solomon played in the Revolutionary War. Solomon, a Polish Jew, succeeded in brokering money (including much of his own) at the request of George Washington. The Continental Army’s coffers were empty and a major battle was about to begin. Solomon went to work and did a complete job of financing the Continentals.

When the film started, the audio was lost so Temple Shalom’s Rabbi Stanley Miles came to the rescue by providing his version of the narrative, which sometimes was quite comical. Everyone seemed to have enjoyed and learned.

Chavurat Shalom usually meets on Thursdays at The Temple (Adath Israel Brith Sholom). It is funded by the Jewish Community of Louisville, the National Council of Jewish Women, Louisville Section, a Jewish Community Excellence Grant from Jewish Hospital Healthcare Services, the Temple Brotherhood and Sisterhood, and many other generous sponsors.