Chabad of Kentucky sponsored several Chanukah activities for the community this month. 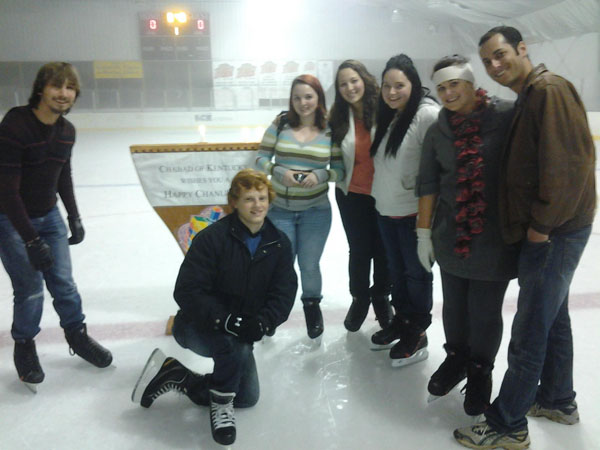 On Sunday, December 9, there was a Chanukah Ice Skating Party at Alpine Skate Arena highlighted by the lighting of a grand menorah. Over 100 people took part in the singing of the blessings and the holiday songs as Rabbi Shlomo Litvin, dressed as Judah Maccabee, lit the menorah and led the skating session.

There were latkes, sufganiot (Israeli donuts) and hot chocolate for all. The children especially enjoyed the Jewish music while skating, as well as the dreidels and chocolate Chanukah coins.

This program was co-sponsored by the Louisville Jewish Day School.

On Wednesday, December 12, at 6 p.m. a parade of cars adorned with Chanukah flags traveled from The Temple’s parking lot to The Summit shopping center, where Chabad had erected a giant menorah outside Quest Outdoors.
Mayor Greg Fischer lit the first candle and spoke of the need for every person to be a light to the area around them. He also said the entire city should celebrate the victory of good over evil and light over darkness.

Throughout the holiday, Chabad and Congregation Anshei Sfard ran a food drive, collecting canned goods for the Jewish Family & Career Services Food Pantry. On Sunday, December 16, at Anshei Sfard, a Can-orah was constructed out of the donated food. It was topped with candles which were lit as the holiday drew to a close. Golda Litvin and Chaya Susman led those assembled in the blessings and helped the children with Chanukah songs.

Chabad’s activities this year were not restricted to Louisville. On Tuesday, December 11, Chabad sponsored a community menorah lighting in Lexington at the Joseph Beth Bookstore. University of Kentucky President Dr. Eli Capilouto lit the menorah and delivered a holiday message.

Rabbi Avrohom Litvin described Dr. Capilouto as a true Maccabee who has come to this community to help illuminate this community with the bright light of education and knowledge. Refreshments and traditional holiday delicacies were enjoyed by all who participated.

Chanukah is one of the most visible Jewish holidays in the general community, but many of our neighbors know very little about it. To increase understanding of our holiday traditions, the Jewish Community Relations Council invited people from congregations across …

Chanukah in the Lobby Celebrate Chanukah at the JCC! Candle lighting and latkes at 5 p.m. in the JCC lobby. Monday – Friday December 10 – 14, 2012 For more information, call the Information desk at 459-0660

Closings In honor of Martin Luther King Jr Day, Monday, January 21, Jewish Family & Career Services and Temple Shalom will be closed. Congregation Adath Jeshurun will also be closed and morning minyan will be held at the special holiday …