CenterStage strikes up an intense yet endearing competition as it presents its rendition of The 25th Annual Putnam County Spelling Bee at the Jewish Community Center. Performances will be August 26, 28, 30, 31, and September 2 and 4 at 7:30 p.m.; and August 29 at 2 and 7 p.m.

The 25th Annual Putnam County Spelling Bee is a one act musical comedy centered around a fictional spelling bee set in a geographically ambiguous Putnam Valley Middle School. Six quirky adolescents compete in the Bee, overseen by three equally-quirky grown-ups, who learn that winning isn’t everything and losing doesn’t necessarily make you a loser.

The use of audience participants gives the musical a unique, interesting twist. Each night the witty cast challenges four audience members to join them on stage for a bona fide spell-off. Each new foursome guarantees a new set of hilarious and unexpected experiences, making each performance just as unique as the one before it.

Keeping with the Tony-award winning season, The 25th Annual Putnam County Spelling Bee was nominated for six Tony Awards, including for Best Book of a Musical and Best Featured Actor. The show’s music is by William Finn, with lyrics by Rachel Sheinkin. 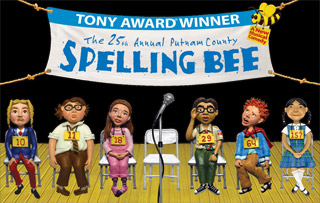 The rest of CenterStage’s 2010-2011 Tony Award winning season includes Brigadoon, Man of La Mancha, The Music Man and A Funny Thing Happened on the Way to the Forum. Show and season ticket information available online or by calling Marcy Workman, 238-2739. Read more with Louisville.com’s preview.