Each season, under the inspiration of Artistic Director John R. Leffert, CenterStage embarks on seven ambitious productions of popular Broadway classics. Join us in the Spotlight as we take you beyond your expectations with visually stunning sets and costumes, amazing talent and music that will move you.  Call (502) 459-0660 for more information or to order tickets. 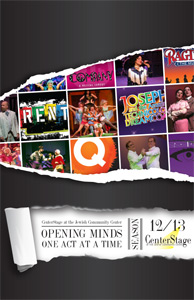 Set in the East Village of New York City, RENT is about falling in love, finding your voice and living for today. Winner of the Tony Award® for Best Musical and the Pulitzer Prize for Drama, RENT has become a pop cultural phenomenon with songs that rock and a story that resonates with audiences of all ages. Strong Language and Mature Themes.

The acclaimed, groundbreaking musical “that pushe[d] Broadway in new directions” (Rolling Stone). With a thrilling contemporary score, NEXT TO NORMAL is an emotional powerhouse of a musical about a family trying to take care of themselves and each other. Winner of the 2010 Pulitzer Prize for Drama®  Strong Language.

Based on E.L. Doctorow’s distinguished novel, the musical intertwines the stories of three extraordinary families, as they confront history’s timeless contradictions of wealth and poverty, freedom and prejudice, hope and despair, and what it means to live in America. Called by Time Magazine “A triumph for the stage,” and by the International Herald Tribune “the best musical in twenty years,” this acclaimed musical won 1998 Tony Awards for Best Score, Book and Orchestrations, and won both the Drama Desk and Outer Critics Circle Awards for Best Musical and Best Score.

The clashing sounds and pulsing rhythms of New York City underscore this landmark “concept” show, considered by many to have inaugurated the modern era of musical theatre. COMPANY follows our anti-hero bachelor Robert as he makes his way through a series of encounters with April (the stewardess), Kathy (the girl who’s going to marry someone else), Marta (the “peculiar” one), as well as with his married friends.

The Biblical saga of Joseph and his coat of many colors comes to vibrant life in this delightful musical parable. Joseph, his father’s favorite son, is a boy blessed with prophetic dreams. When he is sold into slavery by his jealous brothers and taken to Egypt, Joseph endures a series of adventures in which his spirit and humanity are continually challenged. Set to an engaging cornucopia of musical styles, from country-western and calypso to bubble-gum pop and rock ‘n’ roll, this Old Testament tale emerges both timely and timeless.

AVENUE Q is a laugh-out-loud musical that tells the timeless story of a recent college grad named PRINCETON who moves into a shabby New York apartment all the way out on Avenue Q. Winner of the TONY® “TRIPLE CROWN” for BEST MUSICAL, BEST SCORE and BEST BOOK, AVENUE Q is part flesh, part felt and packed with heart. Strong Language and Mature Themes.

Tickets can be purchased at the front desk of the Jewish Community Center, 3600 Dutchmans Lane, or by phone by calling (502) 459-0660. You can also order tickets online by clicking here. There is a small convenience fee for online ordering. Online tickets must be purchased at least the day before the performance.

– Priority seating before house opens
– Discount tickets to other cultural arts events (JCC Orchestra, CenterStage Season Extras)
– Up to 35% savings
– Backstage Pass: Join us for a rehearsal to see how the magic happens. The dates listed below are not actual performance, but only an open rehearsal. These rehearsals are open to subscribers only. You do not need to make reservations to attend.  They will start at 7:30 p.m.